A s the final hammer fell in the Contemporary Art Evening Auction at Sotheby’s last week, history was made: it marked the first time a piece of live performance art had been sold at auction. As the packed saleroom looked on, the final lot of the sale — Banksy’s Girl with Balloon — was in the midst of an intense bidding battle from buyers in the room and on the phones, but what was to follow has dominated headlines the world over, taking the art world by storm and prompting speculation and debate. Seconds after the hammer fell, part of the canvas passed through a hidden shredder, and in the process of ‘destroying’ the artwork, a new one was created.

In a 2017 poll of UK arts writers to discover the nation’s favourite art work, Banksy’s Balloon Girl came out at number one. The painting was housed in an ‘artist’s frame’, a large, heavy, Victorian-style frame of the kind often used by Banksy to poke fun at the establishment. He has previously pulled stunts in the some of the world’s most respected museums and galleries such as the Louvre, Tate Britain, the British Museum, the Museum of Modern Art, the Metropolitan Museum of Art, covertly hanging his own works alongside the permanent collection. In many cases, it took some time for these subversive interventions to be detected. In doing so, and in this latest action at Sotheby’s, Banksy has cleverly nestled himself in the pages of art history.

The new work has been granted a certificate by Pest Control, Banksy’s authentication body, and has been given a new title, Love is in the Bin. The buyer, a female European collector and a long-standing client of Sotheby’s, is proceeding with the purchase at the same price as was achieved in the room on the night. The buyer commented: “When the hammer came down last week and the work was shredded, I was at first shocked, but gradually I began to realise that I would end up with my own piece of art history.” 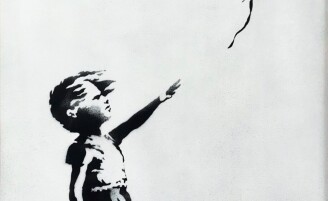 Amidst speculation that this was a collaboration with Sotheby’s, Banksy’s former gallerist Steve Lazarides said: “I worked for him for 12 years, the idea of him colluding with an institution to pull off a stunt is the complete antithesis to his philosophy.”

Sotheby’s Alex Branczik observed that the destruction of works by an artist is not without precedent in the art world: “Rauschenberg erased de Kooning’s drawing; Gustav Metzger and Jean Tinguely pioneered auto-destructive art; Michael Landy shredded all his possessions; and what about Banksy himself and his corrupted oils?”

Love is in the Bin, 2018, will be on view to the public in Sotheby’s new Bond Street Galleries on Saturday and Sunday 13 and 14 October from noon until 5pm. Last entry at 4.40pm. 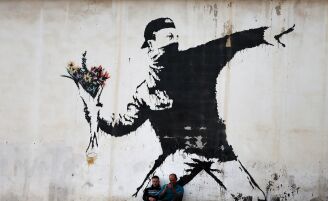 Discover more about the artist
Banksy