Kindred Spirits in Art and Life: Harry and Kaare

F or more than forty years, Harry Bertoia has been close to our family. When he and my father, Kaare Berntsen, were introduced by their mutual friend, Clifford B. West, in the early 1970s, it marked the beginning of a deep and meaningful friendship that not only crossed the Atlantic, but also included their wives: Brigitta Bertoia, Frøydis Berntsen, and Bente West. They were kindred spirits, and together they travelled between Norway and the United States, sharing art, conversation, and much cherished companionship. Their friendship persisted on even after Harry’s passing.

Upon returning from their travels in the US, Kaare would report back to us on the wonderful time spent with the Bertoias and the Wests, and he would share news about the exciting work he saw in Harry’s studio.  Kaare was an art and antiques dealer in Oslo, and had taken over our family business, Kaare Berntsen AS (including Gallery KB), which was established in 1930 by his father. He and my grandfather developed Kaare Berntsen AS into the leading art dealer in Norway, and from the late 1960s until the early 2000s, Kaare positioned our family business as one of the world’s leading dealers of paintings and prints by Edvard Munch. During this same period, Kaare also focused on the work of his good friend Harry Bertoia, who in the 1970s was regarded by art critics as one of the most outstanding sculptors of the time. There is no doubt in my mind, nor was there ever a doubt in Kaare’s mind, that Harry was a true artist.

Kaare was an avid art lover and had close relationships with various contemporary artists throughout his life. Many of those artists have expressed that Kaare understood and related to them better than most other dealers and collectors – that he had more the mind of an artist than a dealer. Kaare instantly recognized the genius in Harry’s work and fell in love with it. Throughout the 1970s, in addition to their personal friendship, they had an active working relationship. It included several solo shows in our gallery, as well as other important places like The Grieg Hall in Bergen and the Henie Onstad Art Centre outside Oslo. Through the decades we have also had the enormous pleasure of including many beautiful pieces by Harry Bertoia in several of our various sales exhibitions in our gallery. Many of our good clients and art collectors are happy owners of Bertoias today.

KAARE BERNTSEN IN GARDEN WITH A BERTOIA DANDELION SCULPTURE, PHOTOGRAPHED BY PER G. MAURTVEDT, 1972.

In the 1970s my sister, Sofie, and I were small children, but the name Harry Bertoia was familiar. We remember the American artist, the bold, charismatic man, with his smoking pipe always in hand. We knew him as the Master of the fascinating sculptures in our garden and around our home. Their dynamic forms, curious textures and, of course, the enchanting sounds they emitted formed the landscape of our childhood. They were landmarks around which we played hide-and-seek, they were wild monsters, and they were also good friends to us.  We had Bertoia chairs in our gallery and his small metal sculptures would find their way into Kaare’s writing desk drawers–enduring souvenirs from a close friendship.

I have always believed that the beauty of Bertoia’s sculpture is something we perceive intuitively within them. They have a timeless quality perhaps because, as Kaare used to say, they capture the essence of the non-material aspects of life. The bushes grow, the sonambients sing, and the welded forms and spill casts ask to be touched. Form, texture, light and sound combine to create an entity that is not just seen or heard, but experienced – like what you may experience when coming in direct contact with the beauty of nature.

Kaare was a devoted art collector his whole life.  He sadly passed away in 2014, and our family is committed to managing his broad collection with the same integrity and care with which he built it over so many years.  After thorough consideration, including with Kaare during his last years, we have agreed that it is time to pass some of the treasures in his possession to new collectors. This very special auction celebrates and offers insight into the many ways Bertoia worked and expressed himself.Bertoia was so far ahead of his time, it was like he saw in all directions—to this day, I am amazed by the way his works meld effortlessly with all artistic genres, from Contemporary art to Old Masters to Design. They simultaneously fit in and stand out.  Bertoia still speaks to the art world, and the impact of his work is unmatched. I do hope these incredible objects, which my father acquired directly from Harry, will find new, deserving homes. They brought great joy to a small child, a mature son, and Bertoia’s own dear friends. 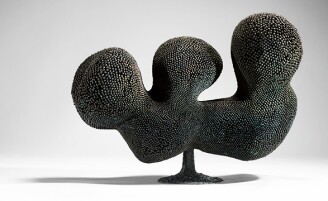