Kim Lim and the All-Female Hayward Annual Committee of 1978

Kim Lim, whose work is currently the subject of an exhibition at Sotheby's S|2 Gallery, was chosen to feature as one of these talented figures in 1978, the first year of the annual exhibition’s history.

Alongside works by Frank Auerbach, Kenneth Martin and John Latham, Kim Lim's works - Intervals I, II (1973), Link II (1976) and Interstices II (1977) had been chosen, in the words of the exhibition’s press release, because they were both ‘personally stimulating and worth bringing to the public’s attention.' Lim was the only woman artist to be exhibited and the only non-white artist in the entire show.

The year 1975 had witnessed an increasing awareness of certain systemic sexist biases in the art world. For instance, there had been protests outside the Hayward’s 1975 exhibition The Condition of Sculpture on account of its overrepresentation of men and Liliane Lijn had proposed a women’s exhibition to both Tate and the Arts Council. Consequently, the Hayward Annual chose an all-female selection committee in 1978. Five women artists were invited to preside over its committee for its second Annual exhibition: Tess Jaray, Liliane Lijn, Kim Lim, Rita Donagh and Gillian Wise Ciobaratu. The exhibition did not comprise, however, of solely women artists, as the aim was to ‘bring to the attention of the public the quality of the work of women artists in a mixed show’.

In her introduction to the exhibition catalogue, art critic and artist Lucy Lippard claims: ‘it has taken some courage to organise a mixed show while admitting to a bias in favour of women. All-male shows selected by all-male juries have never stated their prejudice so openly. This year’s selectors have gone out of their way to offer a different kind of show’. Conversely, in an essay in the Feminist Review the following year, art historian Griselda Pollock saw the show as ‘dominated by an emphasis on visual aesthetic pleasure and avoidance of overt or representational content’. Indeed, it is true that many of the works such as those exhibited by Sandra Blow and Deanna Petherbridge or those by members of the selection committee, such as Liliane Lijn and Tess Jaray, are not overtly ‘feminist’ works.

Yet it is difficult to deny the very fact that the 1978 Hayward Annual II sought to offer a platform for women artists and, indirectly, to demonstrate that sexism in the arts finds its roots in selection and curation long before any kind of public exposition. Ultimately Kim Lim’s desire not to be pigeonholed for her gender was in complete alignment with the final goal of the Hayward Annual, both as an artist and as a female curator. The Hayward Annual in 1978 was an opportunity to empower underrepresented female artists working in Britain, and it allowed Kim Lim to consider the state of contemporary art on a broader scale. 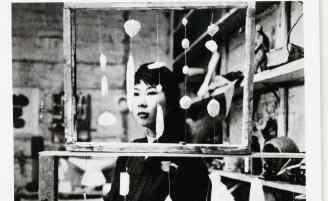