V ogue describes Kate Moss as the model for the 21st century. According to Moss – supermodel, style icon, fashion designer and darling of the paparazzi – to be a muse one needs a can-do attitude. “I am prepared to stand in a bikini at the end of an ice glacier when it’s minus 30,” she said. “That’s the job.”

This autumn sees Moss feature in a number of works offered at Sotheby’s London and New York salerooms. A selection of contemporary photographs traces her career through the Nineties and the Noughties, and a gold sculpture by Marc Quinn casts her as “a modern day Aphrodite”.

In 2003, W magazine – Moss has appeared on 17 covers – announced that she was their muse. It should get in line. “She swept me away,” observed the photographer Mario Sorrenti, her boyfriend from her early years of modelling. John Galliano called her a “Godsend”. And Mario Testino said, simply: “She's rock'n'roll.”

Time is the enemy of the muse. The ability to transcend fashion is, ironically, a requirement of a great muse. Spotted by an agency scout queuing at JFK Airport in New York, her first fashion shoot, as a teenager, was by Corinne Day for The Face in 1990. In the quarter of a century since, Moss has worked with a ticklist of the world’s most famous photographers, including Juergen Teller, Ellen von Unworth, Nick Knight, Peter Lindbergh and David Bailey – “They’re all wild,” Moss said of her Bailey shoots.

Her chameleon nature has been key to her durable popularity. She has personified Cool Britannia, grunge and boho-chic. Her modelling career has included campaigns for Chanel, Dior, Burberry, Alexander McQueen and Alexander Wang. And she has herself designed collections of clothes for Top Shop and handbags for Longchamp.

Snapped by the finest, she has also been immortalised in oils by street artist Banksy, society portraitist Jason Brooks and, most famously, Lucian Freud – who not only put her on canvas but also tattooed a little bird on her skin.

In 2008, Marc Quinn completed a series of sculptures of Moss, including a life-size gold figure of Moss entitled Siren – reportedly the largest gold sculpture completed since the time of Tutankhamun – which was a highlight of the British Museum Statuefilia exhibition. In London this October, Quinn’s 18-carat, 19-inch Head of Kate Moss will be offered in The Midas Touch auction, a unique presentation of works in gold from across mediums and eras.

Another essential ingredient to Moss’ eminence is her ability to keep her own counsel. Moss doesn’t do the interview circuit. “Off the record,” is her mantra. That distance has brought a sense of mystique to her work, which often inverts the clichés of male fantasies.

In Rankin’s Suspended Kate in Colour (1999) – offered in the Made in Britain sale in London – she is caught in profile wearing little more than stockings, suspenders and a look of disdain. Moss fearlessly engages the male gaze. And in Kate Moss Descending Staircase (2007), by Mike Figgis (the Oscar-nominated director of Leaving Las Vegas), an overblown “Bond Girl” pose of her in bodice, heels and driving gloves, is disarmed by another nonchalant look into the lens.

An early shot, Kate Moss 3, Malibu (1994), by the late great Herb Ritts is offered in the New York Photographs sale. It is a light summery affair. A far more challenging approach is to be found in the Contemporary Photographs sale: Chuck Close’s group of forensic, grainy digital prints, taken from nine original daguerreotypes, of her nude torso and face. Close pointed out that the daguerreotype process would highlight imperfections in the skin. Characteristically, Moss was unfazed: “I’ve had enough pretty pictures made of me.” 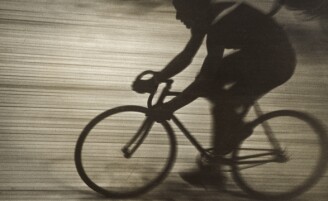