NEW YORK – Born in Honolulu and raised in Tokyo and Los Angeles, Jarret Yoshida references a breadth of cultures and experiences in his interior design. It’s the harmonious mix of these influences that most appeals to him. “I think it’s very easy to blend Asian and Western in a way that doesn’t feel literal, like you’re recreating Shangri-La or the Forbidden Palace,” he says. “Having lived around the Pacific Rim, that’s something I learned over the first twenty-five years of my life.” Yoshida’s talent will be on display at this season’s Saturday at Sotheby’s: Asian Art exhibition, opening Friday 9 September. Below, we spoke with him about his concepts behind the show, the importance of Issey Miyake and his top picks from the catalogue.

What is your vision for the exhibition?
We wanted to make sure that everything feels fresh, and like it could belong in a home. The vast majority of these objects are meant to be used and displayed, not put in a museum. I think it’s very important to show them in context so they feel real and alive. Chinese and Japanese art has been very influential on contemporary design, and a lot of these motifs are quite modern. I’ve lived in Tokyo, Honolulu and Los Angeles, so I understand how to update Asian themes. We’re also collaborating with wallpaper firm Elitis from France, which has also used Asian motifs.

Did you have any key sources of inspiration?
When it came to pottery placement, we thought about Warhol and Pop art, which is about repetition and making the mass-produced seem unique. So we’re going to gather the individual bowls together on an eight-foot-long table to give people the sense of repetition and a way to appreciate the uniqueness of the handcrafted materials. I feel like every item tends to look that much more beautiful when you have a grouping. If you put them all on one table right next to each other, you can really get an idea of how each is different and special. I was also inspired by Raise the Red Lantern, starring Gong Li. The film is a beautiful representation of traditional Chinese life in a modern way. We have an arrangement of period-appropriate Chinese furniture based on one of the key scenes from the movie.

A VIEW OF THE SATURDAY AT SOTHEBY'S: ASIAN ART EXHIBITION, DESIGNED BY JARRET YOSHIDA. PHOTOGRAPH BY JULIAN CASSADY.

Do you have any tips for integrating traditional Asian art into a modern home?
Whenever possible, I would buy at least three of something so that it doesn’t look like a souvenir, but starts to look like you’re developing an aesthetic or connoisseurship. It’s not just about accumulation. If you are buying one piece, you should put it somewhere really special, not hidden on a shelf with eighty-five other things. It should be featured in your home.

How has your Asian background influenced you as an interior designer?
I’m really interested in careful uses of texture and pattern far more than I am in big, exuberant uses of colour. I studied at the École des Beaux Arts et Décoratifs in Paris, so I do integrate European influences into my work in moderation. But I tend to focus on form, texture and material, which I would argue is very Japanese, Chinese and Korean. Select patterns and colours make sure that it doesn’t get too boring – sometimes it might be a whole wall of colour, but all the objects in the room are just beautiful wood or traditional motifs.

A VIEW OF THE SATURDAY AT SOTHEBY'S: ASIAN ART EXHIBITION, DESIGNED BY JARRET YOSHIDA. PHOTOGRAPH BY JULIAN CASSADY.

Could you describe your design philosophy in a few words?
Informed and approachable. It’s important that we don’t just decorate. Items should have visual meaning, whether it’s because of their place in history or because of their emotional connection to the client.

What are your thoughts on the conversation between art and design?
I think that’s a very Western conversation to have. In Asia, arts and crafts are not divided, and art and design are not divided. Which is why someone like fashion designer Issey Miyake is held at the same vaunted position as many of the great artists we see in Sotheby's sale. In comparison with the West, Asia has a very long history of art being widespread and respected. For example, samurai were warriors and artists – you had to be both.

Click below to see Yoshida's favourite pieces from Saturday at Sotheby's: Asian Art. 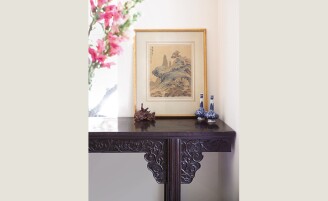