Steal Tricks of the Trade from Design Legend Jacques Grange

Renowned French interior designer Jacques Grange has won clients like Caroline of Monaco and filmmaker Sofia Coppola with his playful eclecticism and exquisitely erudite taste. For MayDay: Covid-19 Charity auction, you can bid on a private interior design consultation with Grange, in which he will share his wealth of knowledge and help you to craft the perfect aesthetic for your home.

W earing his signature loose shirt and jeans, Jacques Grange is stretched out on a chaise longue in his Paris apartment, which overlooks the gardens of the Palais-Royal. Falling into a mild trance-like state, the designer contemplates his process for decorating a room. “It’s all about instinct,” he concludes, after a certain amount of deliberation and hand movement. “The rule is that there are no rules.”

The same could apply to Grange’s approach to forming his eclectic collection, an enlightened mix of Modern and contemporary art, 20th-century design, antiques, photography and 19th-century drawings. Grange spent many years collecting exception pieces such as Paul Gauguin’s Brush Holder, from 1887; a circa 1900 torch by Art Nouveau architect Hector Guimard, reputed for his Paris Metro entrances; an armchair by furniture designer and sculptor Alexandre Noll; François-Xavier Lalanne’s Bar autruche from 1966; and a 2001 Damien Hirst spin painting. Daniel Buren’s 1991 Cercle/Cadre is a fitting wink to the artist’s Les Deux plateaux (otherwise known as “Les Colonnes de Buren”), a site-specific work from 1986 that Buren created for the Palais-Royal’s Cour d’Honneur. 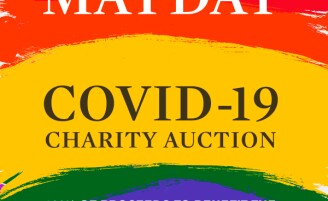 Musing about the range of items in his collection, the 73-year-old Grange continues: “A certain amount was acquired when I was living on the Left Bank. It was very much the moment of dealers like Stéphane Deschamps and others on rue Guénégaud – their vitrines were enchanting. Nothing was driven by marketing then. There was a tremendous spontaneity of spirit and fabulous passion, mixed with outstanding knowledge.”

Of course, the very qualities Grange singles out in others have played a large part in his renown as a decorator and tastemaker. “Jacques’s profound decorative arts knowledge and cultural references are unparalleled,” says landscape designer Madison Cox, “and his wit and sense of pure fun unmatched.” And like Grange’s long and fabled career – peppered with clients such as Yves Saint Laurent and Pierre Bergé, French beauty entrepreneur Terry de Gunzburg, as well as Caroline of Monaco – the designer’s collection reflects his encyclopedic knowledge. It spans more than 40 years.

Sing with Sting, Act with Patrick Stewart and Other Virtual Experiences in Star-Studded Charity Auct

“My first acquisition was a dove by Georges Braque,” Grange says – a piece purchased when he was “seeing a lot of Paloma Picasso,” he notes. It’s not lost on him that Paloma means “dove” in Spanish and that the anecdote is un peu snob. But the name-dropping is forgiven, since Grange’s style is fairly tongue-in-cheek and, after all, he is such a huge star in his own field that his name is one to be dropped as well.

Just as Grange’s extraordinary talent continues to evolve – “I feel charged by working, because every minute changes,” he says – so does the designer’s clientele. In the past decade, it has expanded outside Europe to include stylish young Americans such as Aerin Lauder, The Row fashion designers Mary-Kate and Ashley Olsen and Lauren and Andrés Santo Domingo. (Grange also opened an office in Manhattan in 2013.) “America has been a resounding success for Jacques,” says Terry de Gunzburg, who’s worked on six projects with Grange. “It has furthered his energy.”

“I soon learned that he is far more than a designer, but rather an artist in the fuller sense, as well as an architect and a supervisor of every detail.”

For her part, filmmaker Sofia Coppola admires how the designer manages to be “lavish, beautiful, luxurious and comfortable” at the same time. Grange made sure the Palazzo Margherita in Bernalda – where Coppola chose to get married and which her father, director Francis Ford Coppola, opened in 2012 – was endowed with these qualities. Although Coppola père already knew that the designer was “considered top of the top,” he admits that “seeing his work at the Yves Saint Laurent home in Morocco convinced me.” (Coppola refers to Villa Mabrouka in Tangiers, which Saint Laurent acquired in 1999 and Grange decorated.) “I soon learned that he is far more than a designer, but rather an artist in the fuller sense, as well as an architect and a supervisor of every detail.”

The esteemed collector Joe Donnelly describes Grange as having “an exceptional understanding of interior spaces, of how to make the furniture, art and objects go together.” “He makes it seem easy to get things right,” Donnelly continues. “It isn’t easy. It is a real talent.” Grange’s clients are also quick to offer compliments about his company. “I enjoyed the whole process of walking around with him,” says Lauren Santo Domingo. “He’s fun and a nice guide to a refined world.”

Wine and art collector Robert Agostinelli, a co-founder of private-equity shop Rhône Group who has homes in New York, London and Paris, offers that the “joy of collecting and creating with Grange’s instruction” has led many to become “Jacqueites.” “A simple word – ‘No my love, it is not for you’ or ‘Parfait’ – says it all,” continues Agostinelli. Terry de Gunzburg opines that Grange “starts working when you talk to him – the creation begins then. He has an eye and precision like most geniuses.” And while she appreciates Grange’s sense of the ridiculous – “We can giggle like complete idiots” – she respects how the playful designer can also switch off and become impervious.

Ask Grange about clients and he’ll become sphinx-like. Spilling the beans is not his style. No doubt, he learned the necessity of discretion from his first employer, Henri Samuel, the legendary interior designer whose immense talent and knowledge of the decorative arts endeared him to the Rothschilds, Vanderbilts, Prince Sadruddin Aga Khan and the couturier Valentino, among many others.

Having had the best classical training in the arts, fine craftsmanship and design from the École Boulle and École Camondo-Les Arts Décoratifs, Grange joined Samuel’s Paris firm in 1965. “I was 21 years old,” Grange recalls. “My first project was assisting on the Petit Trianon.” Samuel had been entrusted with the restoration of Versailles’s neoclassical jewel, which Marie-Antoinette made into her private residence. “Working there for three years gave me a true understanding of the great French tradition and quality,” the designer continues. Also influential were Samuel’s commissions of Diego Giacometti and young artists like Guy de Rougemont. “Meeting people like that was a dream,” the designer says.

By his own admission, Grange was not brought up in Samuel’s rarefied world. “But from an early age, decoration fascinated me,” he explains. “I used to pore over Connaissance des Arts magazine and look at the work of Emilio Terry and the houses of Marie-Laure de Noailles.” The latter, a daring collector and patron, eventually became a dear friend. “Marie-Laure, the decorator Madeleine Castaing and Yves Saint Laurent were so liberated in spirit,” Grange recalls, enumerating three individuals who influenced his thinking and creativity. “Through them, I realised that you have to play with objets d’art as you might with toys.” True to this approach, the designer points out: “My most beautiful chandelier is in the bathroom.”

When Grange put his collection up for sale at Sotheby’s in Paris in 2017, he said he felt no regret. “I so enjoyed living with all of it that I love the idea of not dying with all of it,” he says. “Besides, I want to pass my joy onto someone else.” No surprise there: Grange has been doing it all his life.