In Good Health: The Beauvais Buddha

T his gilt-bronze figure of Guanyin is impressive for its large size and crisp casting. According to the Lotus Sutra, Avalokitesvara can take any form necessary to save sentient beings. Thirty-three manifestations of Avalokitesvara are mentioned and are known to have been very popular in Chinese Buddhism as early as the Sui and Tang Dynasties. The present lot depicts the bodhisattva in the manifestation known as Bhaisajyaraja Avalokitesvara, known as the 'Willowleaf' Guanyin in Chinese.

In this form, the bodhisattva holds a vial or bowl of elixir in the left hand and a stalk of willow leaves in the right. The willow has evil-dispelling properties and is used to sprinkle the elixir over devotees. The elixir is believed to cure all physical and spiritual illnesses, and this iconographic form was popular among devotees wishing for good health.

Buddhist gilt-bronze figures were produced in China almost from the beginning when Buddhism was embraced by various courts of China's division after the Han dynasty (206BC–AD220). Until the Tang dynasty (607–906) however they remained very small. One of the earliest developments away from small votive images took place in the Khitan Liao dynasty (907–1125), when sculptures not only became bigger but also developed stylistically towards a more sculptural aesthetic.

During the early Ming period the court took complete control of their production and a distinct classic style was devised that determined the design of all future Chinese Buddhist gilt-bronze images, such as the present work. The intricate nature of this piece adds to its significance in the market. The sale presents an exciting opportunity to acquire this impressive gilt-bronze figure of Bhaisajyaraja Avalokitesvara, coming to the international market from the French collection of Monsieur Erik Le Caruyer de Beauvais. 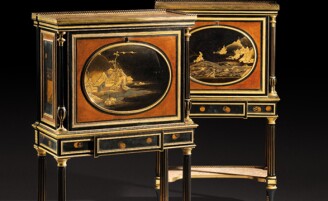