B orn in Omdurman, Sudan in 1930, Ibrahim El-Salahi has been instrumental in the development of a Sudanese and Pan-African Modernism. The combination of African, Islamic and Western identities has allowed El-Salahi to create a distinct visual language that appears at once localised, yet universal. El-Salahi currently has an exhibition on view at S|2 London.

El-Salahi spent his childhood observing his father at work. An Islamic scholar and proficient transcriber of the holy Qur'an, El-Salahi’s father taught at the Omdurman Islamic Institute. A young El-Salahi would watch his father draw on whitewashed surfaces with date-palm kernels, interlacing geometric forms of scripture in an Africanised arabesque style, providing the artist with an early interest in calligraphy.

After graduating from the School of Design at the Gordon Memorial College, Khartoum, El-Salahi won a scholarship to study at the Slade School of Fine Art. While there, he began to experiment with artistic styles and forms of abstraction, with some of his work at this time resembling the pointillism of Pissarro, Seurat, and Sisley. Despite comparisons to both European Impressionist and Post-Impressionist artists, El-Salahi's main source of inspiration continued to be the calligraphic forms and figures he had known in Islamic scripture.

Upon leaving the Slade, the artist returned to Sudan to teach at the College of Fine and Applied Arts in Khartoum. There El-Salahi and fellow Sudanese painters Ahmed Shibrain and Kamala Ishaq formed what came to be known as The Khartoum School. Their work was united by the abstract and representational symbolic potential of the Arabic letter, in which the artist would simplify Arabic script into abstract shapes. This aesthetic, called hurufiyya, a style pioneered in the late 1940s by the Syrian artist Madiha Omar, became one of the Khartoum School’s hallmarks. The School attempted to synthesise elements of Western Modernism with cultural elements originally from Sudan, becoming the foundation of visual Modernism in Sudan and subsequently influential in areas of Africa and across the Arab world. El-Salahi's Untitled painting from 2015, included in the S|2 exhibition, retains elements of the scrolling abstract shapes which were prominent in the work of the Khartoum School.

The artist spent a number of years working within the government sector, undertaking roles in the Sudanese Embassy and the Ministry of Information in Qatar. In the early 1970s, whilst working in Britain for the Sudanese Embassy, El-Salahi was offered the position of Deputy Under Secretary of Culture at the Ministry of Information in Sudan. At the time Sudan was under the military dictatorship of General Gaafar Nimeiry, yet El-Salahi felt duty-bound to accept the post. In 1975, after a failed military coup, the artist was accused of anti-government activities and was arrested and imprisoned without charge. He was incarcerated for just over six months at Khartoum's notorious Cooper prison. During this trying time El-Salahi discovered that the harrowing conditions he was subjected to could be escaped only through his deep spirituality. This was, according to the artist, a time of great personal change.

During his imprisonment the artist began sketching in secret using pen and ink on tiny scraps of paper that he kept hidden in the sand. These drawings and prose became known as Prison Notebook, which capture a period of introspection and self-examination in El-Salahi's life. The work was acquired by Museum of Modern Art (MoMA) earlier this year. El-Salahi then returned to the pages of a sketchbook to create a direct, artistic response to the Arab Spring in 2011. The Arab Spring Notebook, composed of 46 ink drawings in total, visualises the deep and conflicting emotions and meanings of these events to El-Salahi.

El-Salahi began a third sketchbook in 2014, creating a collection of eighty two ink drawings which formed Life Diary, a highly autobiographical work completed in 2016. The drawings, which are currently on view at S|2 London, see El-Salahi gazing back on his own life. The diary depicts memories from his childhood, interwoven with imaginary scenes and forms from his visions.  Throughout the Life Diary series the artist oscillates between fable, history and allegory.

El-Salahi's work has been exhibited both internationally and within his home nation of Sudan. His solo show at the Dara Art Gallery in Khartoum in 2000 attracted over a thousand visitors and he became the first African artist to be given a full retrospective at the Tate Modern in 2013. El-Salahi continues to question and examine the nature of identity throughout his work. 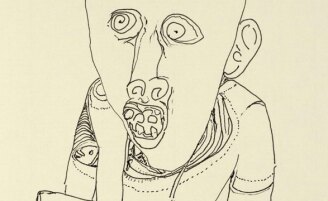