New York
Roy Lichtenstein's 'White Brushstroke I', 1965, is a highlight of Sotheby's upcoming Contemporary Art Evening Auction, which will be held on 29 June.


F rom 1965-66, Roy Lichtenstein completed one of his most iconic series: the Brushstroke paintings. Comprising 15 canvases, the works are considered pivotal masterworks of the Pop Art movement. Today, eight of the 15 works are held in, or promised to such museum collections as the Art Institute of Chicago, Kunsthaus Zürich, Kunstsammlung Nordrhein-Westfalen in Düsseldorf and the Whitney Museum of American Art in New York, among others. This June, one of the few Brushstroke canvases remaining in private hands will feature as a highlight of Sotheby's Contemporary Art Evening Auction: White Brushstroke I.

"In 'White Brushstroke I' and other paintings of the period, Lichtenstein implies that painting can be reduced to a sign and that brushstrokes can be the means by which we recognize, not only a style – but content.” 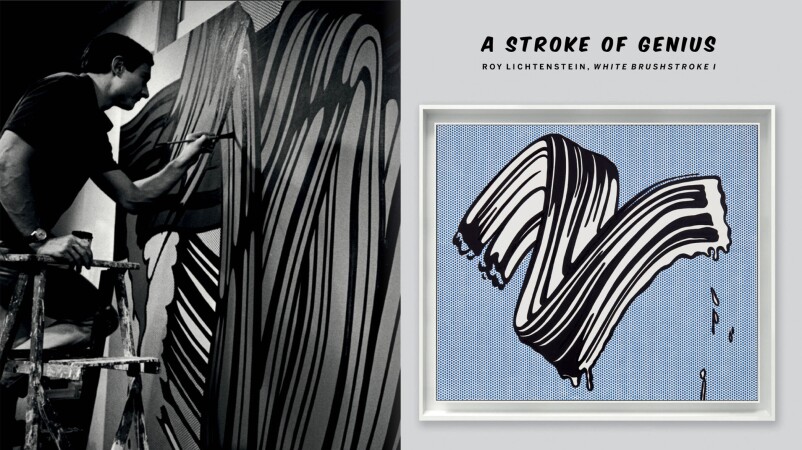 
Completed in 1965, White Brushstroke I is one of the most striking examples from the artist’s iconic series of Brushstroke paintings. The painting’s provenance is extraordinary: following its debut in the seminal Brushstrokes exhibition at Castelli Gallery in New York in 1965, alongside other key examples from the series, White Brushstroke I was acquired that same year by Irving Blum, the founder of the legendary Ferus Gallery in Los Angeles and Lichtenstein's own West Coast dealer at the time. Following three decades in Blum’s celebrated personal collection, White Brushstroke I was acquired by a major private American collection, and emerges today as an undisputed masterwork of the American Pop era.

“I walked into Leo Castelli’s gallery, and found that Lichtenstein’s paintings had quite literally cleared the air… I can still remember the emptiness of the rooms and the clean, articulate surfaces of the canvases, their ambiance of eloquence without angst, of modernist difficulty without theatrical struggle. I also remember that the paintings looked extremely new, and I have never stopped liking that.”

Underscoring the significance of the present work, White Brushstroke I has been featured in numerous seminal exhibitions of Lichtenstein’s oeuvre, including both the artist’s early survey at the Solomon R. Guggenheim Museum, New York in 1969 and the major traveling exhibition Roy Lichtenstein, organized by the Solomon R. Guggenheim Museum in 1993.

Bold, brilliant and irreverent, White Brushstroke I and the other Brushstroke paintings mark a pivotal moment in Lichtenstein’s career-long consideration of art about art. Here, for the first time, Lichtenstein turns his questioning gaze on the very act of painting itself. In its conceptual potency and daring simplicity, the present work demonstrates the singular significance of the Brushstrokes paintings within his oeuvre, and represents the ultimate embodiment of Lichtenstein’s pioneering investigation into the form, content and meaning of contemporary art. As Diane Waldman, former Deputy Director and Senior Curator of the Solomon R. Guggenheim Museum, notes:

“Lichtenstein focused on [the Abstract Expressionist’s] brushwork as the signature of a style and used it – as he had done with the signature styles of Cézanne, Picasso, and Mondrian – to address the issue of what characterizes style in art. Is it defined by an artist’s brushstroke? Is it the result of the transmutation of one form into another? Or could it even be determined by an artist’s signature on a common object? Or does it embrace all of these? In 'White Brushstroke I' and other paintings of the period, Lichtenstein implies that painting can be reduced to a sign and that brushstrokes can be the means by which we recognize, not only a style – but content.”

Sotheby’s live evening and day auctions of Contemporary and Impressionist & Modern Art, previously scheduled for May, will be held in New York on 29 June. Clients and visitors can expect extra precautions to ensure the safety of our employees and visitors, as well as creative opportunities for those wishing to preview our exhibitions and participate in our auctions – from in-person and virtual appointment viewings to enhanced digital experiences. We will announce a more a detailed schedule in due course, including relevant exhibition plans. 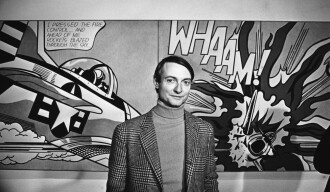