Historic Thatcher Brooch to be Offered at Auction

LONDON – A brooch worn by the former British Prime Minister Margaret Thatcher will feature in the Fine Jewels sale in London on 7 June.

Of geometric design, set with brilliant-cut and baguette diamonds and signed Cartier, the brooch was purchased from Sotheby’s in 1986 with money the buyer had just received as part of her bonus paycheck. The buyer was a close friend of Margaret thatcher and leant her the brooch to wear one day as the brooch Thatcher was wearing at the time did not suit her outfit.

Thatcher loved the brooch so much that she asked if she could borrow it for a long time afterwards and was subsequently photographed with it on several historical occasions such as the day she offered her resignation to the Queen in 1990 and again in 1991 on the day she announced her decision to step down as an MP.

The brooch is accompanied by a facsimile of a letter from Cartier London, dated 3rd February 1989, stating that the brooch was made as a single piece in 1937, and originally sold in 1939. The letter also gives the owner of the brooch permission on behalf of Cartier London 'to select jewellery on approbation for the use of the Prime Minister'.

MARGARET THATCHER ANNOUNCING SHE IS STANDING DOWN AS AN MP. © PA PHOTOS/TOPFOTO.CO.UK

All proceeds from the lot will go to the Endeavour Fund, a charity created by the Royal Foundation that helps servicemen and women recovering from mental and physical injuries with hands-on support, mentoring and advice.

The Fine Jewels sale is in London on 7 June. 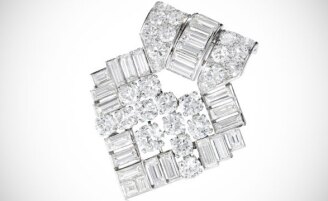