New York
Sotheby’s is honored to offer more than 450 works from the celebrated collection of Ginny Williams across a series of sales throughout 2020, beginning with a dedicated evening auction to be held in New York on 29 June. The evening auction includes several masterworks from esteemed female Abstract Expressionists – whom Ms. Williams famously championed decades before the rest of the art market caught up with her.

G inny Williams was a great champion of female artists, and nowhere is this clearer than in her spectacular collection of works by female abstract expressionists. Long overlooked in favor of their male counterparts, critical and commercial interest in these remarkable painters has vastly increased in recent years, with a major travelling exhibition in 2016, The Women of Abstract Expressionism, proving catalyst for a number of exhibitions focused on these artists around the world, including Abstract Expressionism at the Royal Academy in London, which gave equal weight to female and male artists from the movement, and Lee Krasner: Living Colour, which began at the Barbican and has since travelled around Europe. It is no coincidence that the first of these exhibitions began in Denver, Ginny Williams’ home town, and it is characteristic of her approach that in conjunction with its opening Williams loaned a number of works, including several that are offered in the present sale, to Declaration, an exhibition at Robischon gallery that exclusively showed works by female artists.

The Ginny Williams Evening sale boasts the bulk of these works. Three spectacular paintings by Joan Mitchell, Liens Colorés (1956), Garden Party (1961-62) and Straw (1976), together trace the development of Mitchell’s art on both sides of the Atlantic, from her celebrated period as part of the New York Abstract Expressionist cult in the mid-1950s, through her move to Paris and embrace of nature in the 1960s and culminating with the freedom of scale and gesture afforded by her new studio in Verteuil from the 1970s until the end of her life. Dating to a similar period, Helen Frankenthaler’s Royal Fireworks (1975) is euphoric orchestration of color on a spectacular scale, epitomizing the very best of her practice after her shift from diluted oil paints to acrylic washes.

Finally, two remarkable Lee Krasner paintings from opposite poles of the pivotal Earth Green series, Re-Echo and the eponymous Earth Green, both from 1957, are themselves proclamations Krasner’s identity as a woman painter in the wake of her husband Jackson Pollock’s death.

These works, bought far in advance of the market as a whole – the works by Krasner and Mitchell were all acquired in the 1990s – pay homage to Ginny Williams’ belief and unwavering support for female artists.

They form a pivotal part of this collection which provides us with a fresh take on art in the Post-War period, one that relied less on the convictions of others, and more on a deeply personal taste and instinct. 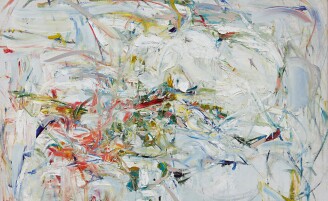