F rom a budding teenage interest in 18th century French porcelain to learning the ropes in the curatorial team of the J. Paul Getty Museum in the 1980s, Adrian Sassoon has always had an exceptional eye and appreciation of beautiful objects.

The world-renowned gallerist of contemporary decorative arts is both a specialist in 18th century Sèvres and Vincennes porcelain and the leading UK dealer in contemporary ceramics, glass, silver, gold, lacquer and hardstone objects. A self-described "hoarder" of his own collection, he is as captivated by antiquities as he is works by brand new graduates and is dedicated to nurturing artists to fulfill their creative potential.

With the absence of art fairs in 2020, Adrian will be exhibiting new works from his impressive stable of artists in Sotheby's newly unveiled showroom in New Bond Street as the inaugural curator of a space showcasing a handpicked selection of art, design and luxury pieces, available for direct purchase.

What attracted you to exhibit in Sotheby’s new showroom?

Last year we did an exhibition with Sotheby’s Old Masters department in New York and it was just terrific. I like this thing of people collecting both historic and contemporary works, and just looking at quality.

Will the selection include works made during lockdown? Has that affected your artists’ output?

The works of art in the Sotheby’s selection are nearly entirely pieces that were either made in 2019 to be ready for their first display in 2020, or were made in 2020. In late 2019 we started filming in artists’ studios because we found it interesting how many artists work in studios on their own and often in remote places – some of our artists work up mountains or on the coast. So we were working on a series of articles on artists working in ’isolation’ when by late March and early April, it just so happened that most of the population of the world found themselves in that situation as well.

Because many artists always work with a degree of isolation, it hasn’t made a vast difference to what they’ve made except for one thing: people are interrupting them less so they’re giving, maybe, a tiny degree of concentration more. When you’re working with fewer interruptions, you get a bit more out of your day.

Who are some of the artists whose work will feature in the exhibition and why are they so special?

We have Hitomi Hosono, a Japanese artist working in porcelain who lives in London. Her work is rather amazing – there are four different pieces of her work in the British Museum’s collection and one in the V&A’s collection. Porcelain is a very unforgiving material so it’s very complex to work with. Many collectors of Old Master paintings have an eye for her work. There’s a fantastic Korean glass artist called Joon Yong Kim who makes staggeringly complex glass in that he’s blending different colours of glass when they’re hot. He has a visual vocabulary – a shape, an outline, a profile that is absolutely distinctive.

Another of our artists who is terribly well known – the wonderful personality that she is – is Kate Malone MBE, the leading ceramicist in England. We’ve worked together for 25 years now and we sell all her important work. I sometimes get an email at two in the morning saying: ‘I’ve just done a very strange thing. I don’t know what you’re going to think of it’ and she will get an email back from me immediately saying: "Go for it. Don’t hold back".

One of the things I hope to have achieved in my career working with artists is just letting the artists do what they do best. We are part of the filtration system from the studio through to the rest of the world, and not the controlling influence over what is made.

And what about new artists? What do you look for?

In the Sotheby’s selection, we have the works of a young man called Nico Conti and he only graduated last year from the RCA. It's very unusual for us to put a new graduate’s work into a show with much more experienced artists but he's just so excellent. He has developed an ability to use tiny particles of porcelain that are 3D printed and actually appear to be woven when you see them in detail. They’re really complex, and they’re relatively low in price - ranging from £1350 to £2700. I like to have something that is new. It’s not an age-related thing: a person who’s got new ideas, with skill, could be in their twenties, could be in their sixties.

What advice would you give to somebody wanting to best showcase a beautiful object in their home?

I’ve always been convinced that if you like an object, you’ll find a place for it. Unless it’s gigantically big or gigantically heavy, you haven’t got too many issues. One of the things I like very much is seeing people put something down in a room and if they feel like it, moving it. I like people moving furniture around in a room – I think that’s fun. I like that flexibility in a home, and that can be at any level of object.

How do you see new technology affecting the output of contemporary arts? Is it exciting or do you worry about traditional techniques being lost?

The use of new technology is not putting somebody else with old-fashioned skills on the street. It’s not robbing somebody else of the ability to make what they want with their hands. Michael Eden is our first and primary 3D printing artist. He was a ceramicist for 20 years then went to the RCA in his forties. He now only works in 3D printing and has been at the forefront of that becoming a familiar process for curators and collectors. One thing about his work is it’s mainly made only once; they’re not editions. By the process it sounds like you could go on making them forever, but most of his work is unique.

As a collector, is there a piece you’ve ever regretted not buying?

Yes, there are some of course. No collector sees everything for sale; none of us know everything that’s going on. That’s always good to remember. My real regrets are what I’ve sold over the years. I bought lots of early-mid 18th century French porcelain in my 20s and in 1992 I thought I was doing the right thing and sold my entire collection to the French National Museum of Ceramics. I really do regret that, but it was the right thing at the time and you can’t undo it.

And as a dealer, there are one or two things I’ll see in collectors' houses and I’ll say "Wow, that’s absolutely beautiful. Where did you get that?" And they look at me like I’m a complete idiot because it was me who sold it to them years ago. Sometimes I think I actually rather would have kept that for myself. But when you’re a dealer you have to deal in things and it’s actually a real pleasure to pass things through the system.

Did you have an appreciation for beautiful things from a young age?

We were very lucky as children. I was born in 1961 and by the late 60s and early 70s, we would go for summer holidays somewhere in Italy or France or Greece so we were exposed to things like the Parthenon, the Coliseum, Venice and Paris. We were taken to museums by our parents. I knew that this history was out there.

Both my grandmothers were collectors on their own level. One had a few of this, and one had a few of that so that made me aware. One of my grandmothers had a small group of good 18th century French porcelain and that’s what got me interested. We’d been taught by my father to be a bit inquisitive. It was when I was studying for my History of Art A-level.

How do you reflect on your time at the Getty Museum in the 1980s?

I was there for five years and at such a funny time because there was absolutely no money. You’d say ‘we need some staples in the office’ and be told to wait until next month. Then after about a year, money arrived and it was: "Oh, can we buy a silver tureen?" "Only one?" "Ok, we’ll get two". We were buying historic objects at the peak of the market. I worked for a very brilliant curator called Gillian Wilson who died last year and she’s been on my mind a lot. She was English, worked at the V&A and then moved to the Getty Museum in 1971 and she was part of a team of three curators who built the Roman Villa with the architects. She knew Mr Getty – she knew exactly what was on his mind, more than many other people. I was lucky to work at the museum when it was still small, intimate, really branching out and building up the collections at a very exciting pace. People used to visit from all over the world who were collectors, auctioneers, museum curators, dealers, amateurs, specialists. It was so exciting.

Have you missed visiting galleries and museums in person over the last few months and how much are you looking forward to getting back to that?

I go to museums a lot. In fact, yesterday morning I went to the Titian exhibition at the National Gallery, and for various reasons they’ve re-hung a lot of the gallery which is quite intriguing. It’s quite fun to go and see old friends, and new – there’s some very interesting new loans there.

It’s quite nice to go somewhere that’s terribly familiar which you haven’t been able to go to for a while – it’s peaceful. It’s very reassuring that things are the same. There’s something funny about works of art – they don’t know about all the emotional things that go on for human beings. Works of art and spaces and buildings, as long as they’re maintained properly, carry on. It’s us who are up and down and peaking and troughing in our lives. The works of art are really consistent. They are there, in situ. It’s incredibly stabilising. A museum has got this stability – it’s what it’s always been – and it makes you feel quite safe. Not everything is as upside down as we are. 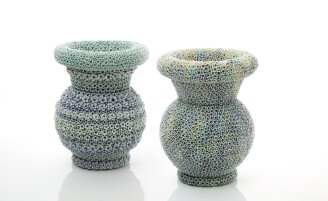