Five of the Most Influential Women Artists from Southeast Asia

T hroughout the 20th Century and up to the present day, women artists have played a significant role in bringing Southeast Asian Art to new heights. Key highlights in the Modern and Contemporary Southeast Asian Art Evening and Day sales (8-9 July, Hong Kong) feature a strong selection of works that reflect the unique voices of the women artists from the region, beginning with Georgette Chen and Anita Magsaysay-Ho, who were singular female voices in their respective countries' pioneering generation of modernist artists. Chen, whose cosmopolitan background informed her incisive and indelible style, was the only woman among Singapore's Nanyang Art Movement group, teaching alongside her male counterparts at the Nanyang Academy of Fine Arts. Similarly, Anita Magsaysay-Ho, the only woman among the Thirteen Moderns in the Philippines, is a highly respected master whose ouevre celebrates the spirit and strength of the Filipino women.

Christine Ay Tjoe, Marina Cruz and Jane Lee are among the most recognizble and critically acclaimed artists from Southeast Asia. Their groundbreaking practices and impressive technical skill are showcased in the following works featured in the upcoming sale.

A rare discovery, Femme Nue is the first nude composition by celebrated female artist Georgette Chen (1906–1993) to appear on the international market. It stands as an important example of her singular voice in the Nanyang Art movement in Singapore. Executed in Paris during the formative years of the artist’s life, the present piece offers a profound understanding of the female body and a masterful celebration of the French salon style that influenced Chen’s early body of work. Femme Nue was acquired from Galerie Barreiro in Paris in the 1930s, and emerges today as a significant and highly desirable work from the artist’s oeuvre.

Georgette Chen, or Zhang Liying, was the only female painter of the pioneering Nanyang group. Chen’s distinctive perspective was shaped by her international and itinerant background. Born to an affluent Chinese antique dealer and republican revolutionary, the family was constantly moving due to her father’s business ventures in Paris, London and New York.

“My father expected me to study Chinese painting, but I had a different idea. I told him I wanted to study the oil medium, which would enable me to paint everything around me, people, food, flowers, salted ducks, sampans, peasants and potatoes.”

In 1930, one of her works was accepted to be exhibited at the Salon d’Automne – a progressive platform for the avant-garde of the Parisian art world. She would continue to show in Paris and participate in major shows, including “Palace of Painting and Sculpture” as part of the Paris World Fair, and “Les Femmes Artistes d’Europe Exposent” (Women Artists in Europe) at the Musee du Jeu de Paume.

Within the context of the male-dominated art circles of the early 20th century, Femme Nue is distinct in the way the artist portrayed the nude female figure – openly and confidently. There is nothing exoticized or contrived about Chen’s depiction, nor is the work explicitly academic. Femme Nue speaks to Chen’s awareness of the voyeuristic gaze that has dominated the history of nude painting. Here, she establishes herself as a leading female voice of her time, carving out a new way of celebrating the female form. Georgette Chen is one of the most admired artists in Singapore’s art history as she spent the later years of her life in Malaya, painting local scenes, people and still-life works. Femme Nue reveals another aspect of her truly international artistic vision and its ability to traverse boundaries.

Washing of the Feet is a singularly powerful work by the female modernist Anita Magsaysay-Ho (1914 – 2012). Striking for its unusual composition and spiritual significance, the painting hails from exceptional provenance as it was composed as a gift to Vice President Emmanuel Pelaez. In this depiction of an iconic biblical scene, Magsaysay-Ho levels the viewer’s gaze on the very act of Jesus washing the feet of his disciples, and thus moves viewers to ponder the magnitude of its meaning in society.

In mid-20th century Southeast Asia, few female artists have garnered the stature and popularity achieved by Anita Magsaysay-Ho during her lifetime. A luminary widely celebrated for her empathetic portrayals of Filipino womanhood and pastoral life, Magsaysay-Ho represents the only woman among the Thirteen Moderns, a revolutionary group of artists who brought modernist art into the mainstream in the 1950s. The artist’s fresh visual palette made waves initially as it clashed against the existing ideals of Filipino classical painting, only later to play an enormous role in the eventual acceptance of modern art in the Philippines.

Executed in 1959, Washing of the Feet was previously in the personal collection of the late Vice President Pelaez, a respected statesman, devout Catholic, and close friend of the artist. Magsaysay-Ho’s choice of subject owes to a conversation they had on leadership and public service.

The themes of Washing of the Feet powerfully resonated with the artist, who departed from her prolific series of women in their worlds of pastoral labor, to produce this highly significant work. Radically distinguishing herself from classical traditions, the artist reinterprets this iconic scene in her own way, paying homage to its symbolism while bearing relevance to her Filipino experience.

Flying Balloon by Christine Ay Tjoe (1973 – ) is a buoyantly enchanting example of the artist's remarkable abstract lexicon which powerfully express personal and universal meaning. Oscillating between balletic harmony and eruptive energy, the painting releases a prancing array of fragmented abstract forms and curious remnants of pictorial elements. In a symphony of pinks, baby blues and browns, the composition suggests a childlike quality, and yet possesses a provocative undercurrent.

Growing up in a household of working parents, the artist recalls spending much of her childhood in solitude, often playing with self-made dolls or finding joy in everyday objects from daily life. In Flying Balloon, this manifests in the remnants of toys, animals and elements of play, which skirt the borders between physical and metaphysical. Completed in 2013 as Ay Tjoe was experiencing young motherhood in her personal life, Flying Balloon is an immensely-layered rhapsodic work conveying the intricate complexities of human life.

“These paintings offer a composition that delivers ‘a balance’ in an erratic, yet sublime, manner. The traces of the artist’s direct and intuitive expressions are persuading ‘the order’ to reach its most improbable limit."

First shown at “Myriad of Paste,” the artist’s first solo exhibition in Japan, Flying Balloon is emblematic of the materiality and sense of action in her signature work. Drawing remains at the core of Ay Tjoe’s practice. She has declared: “To me, painting on canvas is also like drawing.” Verily, she pushes the expressive boundaries of the oil bar – one of her signature mediums. Trained in graphic design and printmaking at the Bandung Institute of Technology, Ay Tjoe still experiments with intaglio dry point technique and etching. Flying Balloon submerses the viewer in a buoyant spirit of play and whimsy, the artist demonstrates her virtuosic abilities in this truly superlative painting, which earned her the prestigious “Best Emerging Artist Using Painting” award at the Prudential Eye Awards in 2015.

Lauded for her unconventional approach to contemporary art practice, Jane Lee (1963 – ) is a virtuoso whose works feature playful interpretations of the medium of painting. Lee’s works challenge and reexamine the assumptions, functions or meanings customarily assigned to the materials as well as structures that traditionally uphold the establishment of the painting. By subversively positioning medium and matter as the main subject of her work, Lee looks to the limitless potential of materiality as a vehicle for artistic expression.

Variations P01 - P04 illustrates Lee’s vast and exact mastery of the medium of painting, as each individual work from Variations carries a distinct textural undulation and character. Miniscule, hill-like edges permeate the surface in a pattern across all four featured pieces. Lee literally weaves shades of purple, with occasional bright specks of magenta, scarlet and cobalt, to create a set of “paintings” that traverse into the realm of sculpture.

Coiling VI employs hand-coiled white or off-white paper to carry the distinct textural movement. Lee’s practice deviates from any representational depictions and narrative strategies. Instead, she presents her works as powerful material explorations. The artist focuses her attention on the physical characteristics and inherent properties of the material itself – in this case the coiled paper. Lee’s profound interest in the textural qualities of her chosen mediums is employed as both material and object in her work: the subject of the art is the art itself.

Beyond Canvas was shown at “Red States,” an exhibition in Hong Kong that focused on the red color works completed over the course of her career. It marks a point when Lee engaged with the act of squeezing paint out of a tube; dense strands of pigment form together and eventually create folding sculptures that drape and gather like heavy cloth. The title calls the viewer to look beyond what they are merely visually confronted with, and to explore the work much as one would an artefact. Crafted with great depth and dimensionality, the work extends far beyond the flat format of a wall-hung canvas. The artist creates a sense of movement within the work as the “canvas” bursts into the space of the viewer. Reminiscent of medieval textiles, the soft and delicate folds are achieved from what is in fact a stiff and thick painted canvas. It is truly indicative of Jane Lee’s technical talents and artistic virtuosity.

Lee’s intellectual engagement with materiality produces new perspectives for the spectator, effectively opening a new way of seeing. Praised for her indelible and unrivaled artistic approach towards the medium of painting, Jane Lee is considered as one of Asia’s most exciting contemporary artists.

Thin Red Line exemplifies paintings of Marina Cruz (1982 – ), known for her depictions of dresses, which the artist executes with photographic realism, capturing the textures of the fabric down to the creases and frayed stitching. Themes of childhood and family recur in Cruz’s oeuvre. Evoking a sense of nostalgia, these family heirlooms of dresses buried in old chest unfold to reveal generations of history and memories – once discarded and forgotten only to be rediscovered and cherished.

“This new body of work is a reflection and meditation on time, aging, passage, leavings, markings, vulnerabilities, and imperfections, things that are all unavoidable.”

Cruz’s meditations on these well-worn, well-loved clothes from a lifetime ago suggest a still-life painting that approaches minimalist abstraction. In Thin Red Line, this is accomplished through the arrangement of colors and shapes, an effect created from the patterns of the tattered dress, mostly shown from interior view, which have been discolored with age. Amplifying the effect are details such as stretched button holes, unraveling threads, torn seams, and puckered red piping. Taking up the entire canvas and depicted with such meticulous detail, the outmoded dress calls attention to the absence of the wearer and all of the events of life that have created the impressions upon the discarded clothing.

Marina Cruz studied fine art at the University of the Philippines, graduating in 2003. Her work has earned her the top prize of competitions including, the Government Service Insurance System Painting Competition in 2004, the Philip Morris Philippine Art Awards in 2007, and the Ateneo Art Awards in 2008. 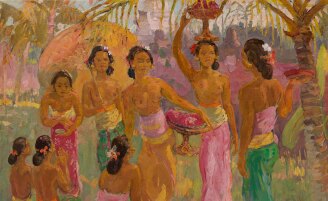