Find the Hidden Cameo in A Magnificent Early Canaletto

By Halina Loft
Leading Italian vedute painter Giovanni Antonio Canal, called Canaletto, completed Architectural Capriccio with Classical Ruins in 1723 for one of the country's great noble families. Featured in Sotheby's Inspired by Chatsworth: A Selling Exhibition, running in New York through 13 September, the painting is one of the artist's earliest masterpieces.

G iovanni Antonio Canal, called Canaletto, was one of the 18th century’s most-renowned Italian masters of vedute painting. Famously, the artist’s captivating cityscapes with canals and recognizable architecture were sought after by collectors of high nobility, including England’s King George III.

But before he painted for counts and kings, Canaletto devoted himself to the stage: the artist began his career as an apprentice for his father and uncle, successful theatrical scene painters Bernardo and Cristoforo Canal, respectively. Their tutelage afforded Canaletto his first commission; together, the trio created the stage sets for operas at the S. Angelo and S. Cassiano theatres in Venice from 1716 until 1718. The following year, Canaletto set out on his own, traveling to Rome to paint scenery for operas by Alessandro Scarlatti.

The Eternal City left a lasting impact on Canaletto’s practice: the artist immersed himself in Rome’s magnificent architecture, completing numerous drawings of the ancient monuments and buildings. Rome also afforded Canaletto the opportunity to encounter the early vedute and architectural capricci of Giovanni Paolo Panini, the city’s leading view painter, a superb example of which is included in the Inspired by Chatsworth selling exhibition (cat. no. 32).

Taken together, the theater and the Eternal City provided Canaletto the ideal training to produce one of his earliest masterpieces, the monumental Architectural capriccio with classical ruins, completed in 1723.

Count Giovanni Benedetto of Italy and his brother, Giovanni Paolo Giovanelli, commissioned this work along with its pendant, the latter of which is held in a private collection. Identical in size, the pair comprise the largest works ever painted by the Venetian master. What’s more, scholars believe the present painting includes the artist’s only known self-portrait. Canaletto isn’t exactly in plain sight, however – he’s hidden within the sweeping composition, which reveals a fantastical mixture of familiar and imagined architecture. Can you spot him?

In this superb 'capriccio', Canaletto’s early training in set design and flourishing fascination with architecture are clearly visible.

Canaletto carefully conducts the viewer’s gaze throughout the canvas, starting with the imposing archway to the right; looking through, one finds the Sansovino’s Liberia di San Marco, a reference to Canaletto's native Venice. The building sits atop a single-story arched colonnade which extends over two-thirds of the composition, ending with a ruined temple housing an overflowing foundation. To the far left, there’s a distant view of Rome’s Lateran Palace and obelisk; to the right, a great church dome looms, overgrown with vegetation. Throughout the work, groups of figures add color and life to the scene: Swiss guards stand in their striped uniforms, keeping the peace; men and women go about their chores and mind their children. At the base of the ionic column to the right, there’s a lone man intently sketching the scene. This, presumably, is Canaletto himself, hard at work.

For centuries, Architectural capriccio with classical ruins and its pendant were central to the grand interior design of Villa Giovanelli at Noventa Padovana, the Giovanelli family's country home in Northern Italy. Now this work returns to the market for the first time in nearly fifty years, a highlight of Sotheby's Inspired by Chatsworth: A Selling Exhibition.

The exhibition runs through 13 September, 2019 – all works are available for immediate purchase until this date. To make an offer on any of these works or enquire further about prices and availability, please contact +1 212 606 7230 or email the relevant specialist contact. 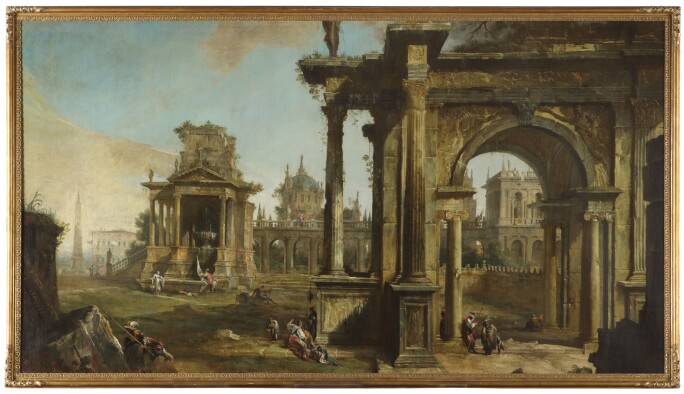 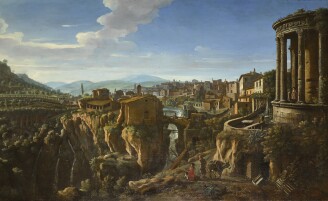