Everybody’s Talking About… the Return of Mary Poppins

S he may be more than 80 years old but Mary Poppins is also the star of this year’s most eagerly anticipated Christmas film, as P.L. Travers' beloved - and practically perfect – nanny is back. Fifty four years after she first appeared on screen, the long-awaited Mary Poppins Returns is released in cinemas on the 19 December.

The all new original Disney musical stars Emily Blunt in the title role along with Lin-Manuel Miranda, Ben Whishaw, Emily Mortimer, Julie Walters, with Colin Firth and Meryl Streep, and is directed by Rob Marshall. This sequel to the 1964 film adaptation is set in Depression-era London and follows a grown-up Michael Banks, played by Ben Whishaw, whose life is mirroring that of his father. He lives at the same house he grew up in – 17 Cherry Tree Lane – with his own children and is working at the same bank that employed his father and grandfather. Once again, P.L. Travers’ otherworldly nanny arrives to solve problems big and small, as extraordinary things begin to happen to ordinary people.

The magical new film will feature nine original songs and a return from the star of the 1964 film, Dick Van Dyke and Angela Lansbury, with some of the principal photography shot at iconic London landmarks including St. Paul’s Cathedral, Buckingham Palace and the Tower of London.

While the plot tells a completely new story, it draws on the tales told in P.L. Travers’ eight original Mary Poppins books published between 1934 and 1988. The first three books of Travers’ series see the enchanted nanny arrive and leave the Banks family home while the following five books form a sort of anthology of stories from her previous visits. The sequels included the titles Mary Poppins Comes Back, Mary Poppins in the Park and Mary Poppins Opens the Door, which involves encounters with a piano tuner, a park statue that comes to life and a magical sweet shop.

The film’s release comes shortly after Sotheby’s will sell several first editions of P.L. Travers’ original Mary Poppins books, that include a 1934 edition of Mary Poppins, which was Travers’ first literary success and published 30 years before the first Walt Disney adaptation. The online sale English Literature, History, Science, Children’s Books & Illustrations, which runs from 30 November until 10 December, will also offer two different first edition copies of the first literary sequel, Mary Poppins Comes Back, written and inscribed by Travers in 1935. The author, who was originally from Australia and moved to England in 1924, wrote the first Mary Poppins book while living in a thatched cottage in East Sussex. 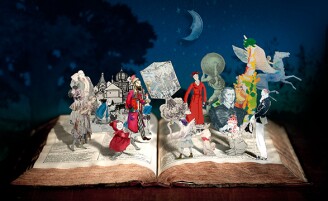