This fall, Sotheby’s is proud to offer a selection of furniture from Osterrieth House, one of the most important buildings in the Meir, Antwerp.

The history of the Osterriethhuis (Osterrieth House) dates back to the early 16th century and it has essentially always been the residence of very wealthy merchants, often bankers and traders at the same time, reflecting the importance of the city as an international trade hub. After Josse Draeck, alderman of the city of Antwerp, the house came into the possession of, amongst others, the Spanish merchants d'Espinosa and after them into that of the Portuguese merchant Simon Rodriguez. The house then passed into the hands of the Milanese merchant Jacomo Antonio Carenna.

In 1874, the villa was purchased by the German merchant Jacques Ernest Osterrieth (1826-1893), whom the house takes its name after. His wife, born Leonia Maria (Léonie) Mols (1843-1918) was a prolific art collector and patron with many leading cultural figures passing through the interiors of the Osterrieth House, amongst others, the French composers Charles Gounod, Jules Massenet and Camille Saint-Saëns. When her husband passed away, with the help of the architect Joseph Hertogs, she carried out renovations in the neo-rococo style.

In 1937 the house was in danger of being sold by the Osterrieth family to a financial consortium that would have extensively transformed the building, thus the building was subsequently protected as a heritage monument in 1939. Unfortunately, it was badly damaged during the Second World War.

From the early 1950’s and up to 2013, the Osteriethhuis has been the property of the Belgian branch of Bank of Paris and the Netherlands (today known as Belfius Bank). The prestigious building underwent a thorough restoration and was expanded by the architect Hugo Van Kuyck with a new office wing on Eikenstraat. After the restoration, the interior was enriched with a selection of fine paintings, engravings, sculptures, tapestries, decorative arts and historical furniture, a portion of which is offered in the present sale (lots 3-15, 40-56, 78-92). 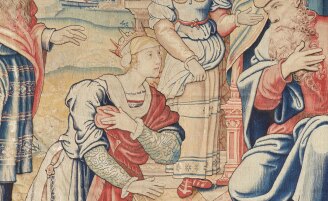