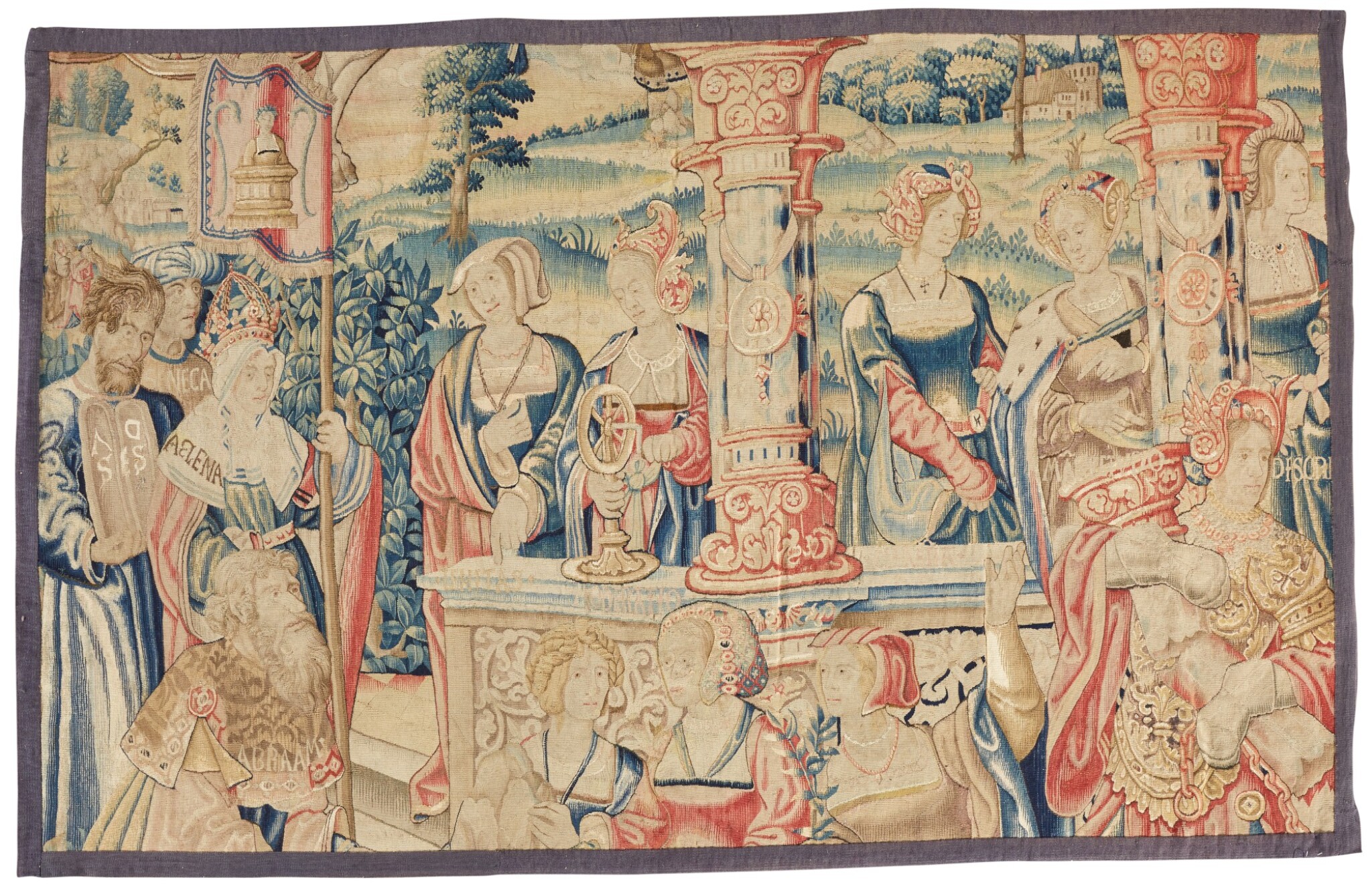 Woven with a row of five female virtues standing behind the gallery of a loggia, Fortune spinning the wheel of fortune, the foreground with further female figures, some pointing to some of the five woven words within the composition (including, Lenitas (longanimitas – long sufferance), Moderatio (discretion), Clemetia (Forgiveness), Mansuetudo (gentleness), in the foreground there is another female figure, with woven name … Aelena?, crowned and holding a banner, three men, Moses, Seneca and Abraham stand on the left, and a further figure wearing full armour, represents Fortitude, (name woven ..disor..) and carries a broken column (referencing the biblical hero Samson), the hooves partially visible along the top edge, are of the horses pulling the chariot of Prudence, the fragment now with later blue outer selvedge; reduced in size

Overall measurements: 260cm across the top, 266cm across the bottom, 259cm along left side, 264cm along right side Very faded colours evenly overall. Repairs in areas, especially to the areas of light colour. Later highlights to eyes, for definition to a faded face. Reduced in size with areas of composition partially visible in areas. Decorative and historically interesting tapestry fragment.

The present fragment is an interpretation of a small section of the complex allegorical narrative of the virtues, from a larger composition of the subject of ‘Virtus’, which shows both the ‘Victory of Virtue and the fall of Fortune, along with the quest for Sapientia Divina: Prudence and Prometheus’, all in the same composition. The offered panel design is taken from the lower left corner of the composition, albeit it with much reduced compositional detail. The woven names on the present panel are in different places on the larger composition as are some of the female figures and their attributes, which in the present fragment are not always woven. The panel does allude to the standards, virtues, one should strive to attain, and what is not seen in this panel, as the vices which are to be avoided. The iconography of the complete panel from which this is influenced represents the Medieval iconography with the Renaissance image of virtue.

There is an especially notable example of a panel of 'Virtus', from a magnificent of nine allegorical ‘Tapestries of the Fortunes’, woven for Charles V, known as Los Honores and woven in the Brussels workshop of Pieter van Aelst, circa 1521-1525, in wool, silk and gold and silver metal-thread, including the panel of Virtus, measuring 510 by 840cm (Patrimonio Nacional, Spain). For comprehensive discussion of the series see Guy Delmarcel, Los Honores – Flemish tapestries for the Emperor Charles V, 2000, Chp. VIII, The Tapestries, 3, Virtus, pp.71-82.