Day 1 in Venice – The White Baaz

S otheby's ushered in the 57th Venice Biennale in magnificent style at the Gritti Palace on Tuesday evening. As the art world descended on Venice for possibly the most important art fair in the world, Sotheby's celebrated Sotheby's Diamonds and pieces from their upcoming Magnificent Jewels auction in Geneva with a special dinner and party for the White Baaz. The White Baaz are nine of the most glamorous and influential women from around the world who all embody that certain quality that Truman Capote captured when he first identified his Swans – a group of his close friends that included some of the most stylish women in 1950s society.

Among this modern day magical set are Margherita Missoni, the model and heiress to the Missoni fashion house; Princess Elizabeth von Thurn und Taxis, editor-at-large of Vogue and a member of the German Princely house of the same name; and Countess Cornelia and Bianca Brandolini d'Adda, who have ancestral ties to Venice with two of the palazzos on the Grand Canal belonging to their family. It is no coincidence that several of the Baaz are related to Capote's original Swans. The dinner was co-hosted by Sotheby's Jewellery Worldwide Chairman and diamond specialist David Bennett and Andres White Correal, whose personal connections brought the White Baaz together.

After dinner the hosts, the Baaz and guests, who included Courtney Love, proceeded from the Gritti Palace's Club del Doge terrace up to the Redentore Terrace, where a falconer from Verona greeted them with a magnificent white baaz falcon. Set to the backdrop of the Venice skyline and overlooking the iconic Santa Maria Della Salute, the roof terrace was the perfect stage for decadent revelry as Olivier Badim's selections on the decks provided a deep, atmospheric accompaniment to the guests lively chatter.

GUESTS DURING THE RECEPTION AT THE GRITTI PALACE, VENICE. PHOTOGRAPH: MOLLY SJ LOWE.

A mixologist with an infinitely accommodating selection of spirits mixed drinks behind the upper bar as the lower bar served champagne accompanied by a spread of biscotti and truffles. As White Correal said, it was: "‘an evening spent amongst good friends and beautiful people" as behind him the diamonds that the White Baaz wore glittered as they moved serenely through the convivial gathering.

Discover the world of the White Baaz, with James Reginato.

Get the latest news on Sotheby's at the Venice Biennale at sothebys.com/venice 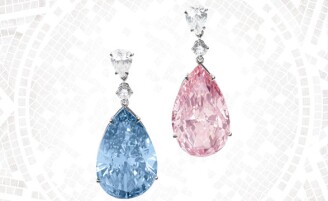