Dawn Comes on the Edge of Night by John La Farge

D awn Comes on the Edge of Night is a true masterpiece of John La Farge’s stained-glass art. The nearly life-size female allegorical figure became a staple of the artist’s work in the last two decades of his life, with such tours de force as Welcome (1909) in The Metropolitan Museum of Art and Spring (1901–02) in the Philadelphia Museum of Art. Dawn presents a daring figural form, a woman leaning into the oncoming light, her garments conforming to her body in the wind. The posture is unusually striking, made more so by the exquisite prismatic palette. The only other window with an equally unusual pose in his work may be Fortune (1900) in the Frick Building in Pittsburgh.

The window was commissioned by Frank Lusk Babbott (1854–1933), a New York businessman and art collector, in 1903 for the staircase of his Brooklyn home. Babbott’s wife, Lydia Richardson Pratt (1858-1904), was the daughter of Charles Pratt, founder of Pratt Institute. Her brothers, Frederic Bayley Pratt (1865-1945) and Herbert Lee Pratt (1871-1945), were both patrons of La Farge’s stained-glass. Though it is not known how Babbott came to commission the window, he clearly knew of La Farge from art circles and the windows his brothers-in-law had purchased around the same time. Upon his death, most of Babbott’s great art collection was donated to the Brooklyn Museum (where he had served on the Governing Committee) including a group of stained-glass pieces. He was also president of the board of trustees of Packer Collegiate Institute from 1911 until his death. His children donated Dawn to the school, where it was installed until 1986, when it was purchased by a private collector.

The design of the window is based on an 1883 black-crayon sketch for a mural intended for the Cornelius Vanderbilt II mansion in Manhattan. It was never used in that house (a different version of the dawn subject was selected), but La Farge created an oil painting of it in 1899, which was exhibited in Boston and Pittsburgh shortly afterward and purchased by a Boston collector. La Farge painted it a third time, a watercolor executed in 1903 as a preparation drawing for the window. The four versions are remarkably similar, with identical drapery folds, cloud formations, and vague land or water on which the figure stands. The artist copyrighted the design in April 1903, describing it as “the figure of a woman leaning or floating, sea and sky in landscape.”

It is impossible to know whether La Farge had hoped to execute the figure in glass when he first sketched it in 1883. If he tried, the window would have been very different. In the early 1880s, opalescent glass as a material was in its infancy, as was La Farge’s experience with it as a medium. By the time Dawn was created, both the glass and La Farge’s craftsmanship had matured. La Farge first “discovered” opalescent glass many years earlier in 1876, when he noticed how light was refracted through milk-glass objects on his dressing table in all the hues of the rainbow, like an opal gemstone. This translucent opaline glass had been used for vessels and other objects since at least the 1830s, but it was not made in flat sheets for windows. He ventured to flint-glass manufacturers in Brooklyn to see if they could or would make flat glass for him. They did so, and he made his first opalescent window in 1879. The medium became hugely popular almost overnight (thanks in part to Louis Comfort Tiffany’s efforts in the same vein at the same time). Windows of this early period of his work are characterized by large pieces of glass, many layers, a wide array of unusual pieces, and a great deal of paint. 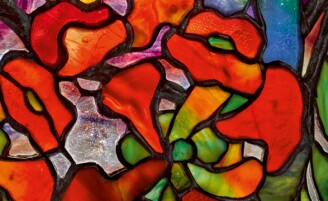 The glass manufacturing field changed in the mid-1880s when the center of the glass-making industry moved from the east coast to the Midwest. New opalescent-glass factories standardized the colors of glass, broadening it to produce thousands of repeatable shades. La Farge now had an unlimited supply of the material, which he said was the same as having “pigments in one’s palette,” thus diminishing the need for extensive plating and painting, ushering in his late style, of which Dawn is an exceptional example. Now, every tint, hue, shadow, mid-tone, and highlight could be achieved in individual pieces surrounded by a tiny lead came. Hundreds of minute pieces of glass, some no more than 3/16 inch wide, made up the drapery of dramatic, realistic figures drawn in the style of the French Academic Salon painters. However, even with these advancements in glass, La Farge (unlike Tiffany) remained unopposed to using glass- and oil-paints if it furthered his artistry, as it clearly did in the case of Dawn. From the waist up, Dawn is painted on two pieces of glass on the obverse side, enormous in size with exquisite detail, executed in both fired and unfired (called cold) paint. To add further modeling and chiaroscuro, La Farge added large, etched, flashed-glass plates to the reverse surface of the window.

The precise configuration of the window in Babbott’s house is not known. What survives today includes the figural panel, two egg-and-dart borders, and a decorative panel with the name of the figure. Two sketches of the window’s layout survive. One, with notes in La Farge’s hand offers some insight into the artist’s planning. It shows the name panel above the figural panel, with another tall panel at the bottom that was to have a date in Roman numerals. At each side of the window are shown wide, simple, green and yellow architectonic borders that are crossed out on one side. La Farge’s notes at the bottom of the drawing relate to glass colors in various locations, directing “Mr. Wright” (his chief stained-glass foreman) to use whatever colors “he likes,” indicating La Farge’s trust in Wright to frame his window in colors that would enhance it. The second sketch shows a smaller portion of the window, setting the figure panel (which is not shown) within a frame of Ionic columns with a Greek-key and denticulated entablature. The name panel and egg-and-dart bands are not shown. This window design configuration was realized for La Farge’s Fortune window at the Frick Building in Pittsburgh.

La Farge’s late windows are stunning examples of the glaziers’ art and demonstrate the artist’s remarkable color sense and illusionistic draftsmanship. Dawn Comes on the Edge of Night is one of his finest windows, a gorgeous, dramatic figure in a brilliant and ethereal landscape to stun and awe its viewers.

Julie L Sloan is a stained-glass consultant based in North Adams, Massachusetts.