H oover was founded in the early 20th century and introduced the world to the revolutionary utility of the vacuum from the company's headquarters in Ohio. It has since become an iconic household name associated with expert engineering in the floor-care industry and has gained recognition for the firm’s significant contributions to the US war production during WWII. This black enamel and diamond brooch, inscribed ‘Darling: I love you more each day,’ was designed by David Webb, and it is believed that Mr. Earl Hoover gifted this brooch to his wife Miriam, who enjoyed it for many years. Now being offered in Sotheby’s Jewels Online auction (6–18 July, Online) a new owner can take this unique glittering vacuum for a spin.

Weekly visits to The Metropolitan Museum of Art inspired Webb to incorporate motifs from around the world, including ancient Greek, Roman and Egyptian, as well as pre-Columbian, Indian and Chinese. Webb jewels are certainly not for the shrinking violet. There is nothing delicate, subtle or understated about them, and the woman who chooses Webb has confidence in her style and a definite point of view. Below, view a selection of David Webb jewels from upcoming auctions. 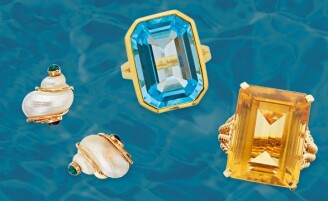