E ight of the world's leading contemporary artists, including Tracey Emin, Anish Kapoor and Yinka Shonibare, have generously donated artworks that will be sold by Sotheby's to raise much-needed funds to support food provision to London's poor, elderly and vulnerable in the wake of the COVID-19 crisis and the creation of a community kitchen serving London's homeless community.

The donated works will be sold in the Contemporary Art Day Sale, open from 20-30 July with all proceeds going towards the Evening Standard's Food For London Now and The Independent's Help the Hungry appeals, in aid of The Felix Project, London's largest food surplus distributor.

Highlights from the auction include an intimate drawing from Tracey Emin, a series of three etchings by Anish Kapoor and Mark Wallinger’s Ghost. Unstructured Icons - Aristocrat I by Yinka Shonibare also joins the line-up alongside a pair of polished steel reliefs by British artist Michael Craig-Martin.

Established in 2016, The Felix Project collects quality food from the food industry that can no longer be sold and would otherwise go to waste. Working with a team of volunteers, the charity distributes food to 350 front-line charities, primary schools and holiday programmes in London. Since the start of lockdown, the charity has already delivered 7 million meals, and their next aim is to create the capital’s biggest community kitchen with money from the sale going towards this vital venture.

"Over the past three months The Felix Project has scaled up fast and effectively to meet the hunger crisis, which has followed in the wake of Covid-19"

Another donation, We Have Only Got Each Other by Bob & Roberta Smith features an inscription inspired by one of the last few words uttered by the artist’s mother: "I make all sorts of things, but 'We have only got each other’, is a statement by my mother the artist Deirdre Borlase. We were talking about how politics can divide people. She had recently suffered a stroke and found conversation difficult but then suddenly she uttered these words. She passed away not long afterwards."

Ai Weiwei's works – Blossom, Bicycle Basket with Flowers in Porcelain, and Flower Plates – were created in the kilns of Jingdezhen, and hail from his Surveillance series. Following his arrest and secret detention lasting 81 days in 2011, the artist’s passport was confiscated and a battery of surveillance cameras were installed around his studio house in Beijing. In response, on 30 November 2013, Ai announced that he would begin the daily practice of placing a bouquet of fresh flowers in the bicycle basket outside of his studio until his passport was returned. He photographed the flowers and shared the images on his website and social media accounts. Ai’s supporters also shared images under the tag #FlowersForFreedom. The project concluded on 22 July 2015, following the return of the artist’s passport.

Yinka Shonibare's Unstructured Icons series are prints which playfully deconstruct icons of 'Western Power' by de-westernising them through masking their faces with African masks. The prints parody 18th century excess enabled by colonisation and the slave trade, an excessive lifestyle which celebrated opulent fashions and the outrageous wearing of elaborately decorated wigs sumptuously expensive textiles. Dogon-style animal masks from Mali in West Africa are juxtaposed onto the faces of the 18th century aristocracy, such as Pope Innocent X, Henry VIII or Queen Elizabeth I. In these works, Sonibare juxtaposes the patterns of Western power with the patterns of African textiles to further explore power relations and the layers of the complexity of 21st century hybrid identities. Shonibare colleages actual Batik textiles into these woodcuts to further highlight the complexity of contrast formally in the prints themselves.

Justin Byam Shaw, the founder of The Felix Project, said: “Over the past three months The Felix Project has scaled up fast and effectively to meet the hunger crisis, which has followed in the wake of Covid-19. Sotheby’s has been a Felix supporter almost since our launch and, together with The Evening Standard, it has found a new way to support our plan to expand our operation across all of London. This extraordinary auction of donated works from so many leading artists is a first for us and for London.

This new community kitchen will be unique. It will provide a high-quality lunch for homeless Londoners, cooked by great chefs using surplus food. The kitchen will also be used to produce hot meals from food provided and then distributed by us to charities around London."

Speaking about the mission, Evgeny Lebedev, owner of the Evening Standard and The Independent, explains: “The Covid-19 crisis has truly highlighted the vital need for food charities, such as The Felix Project. Now, more than ever before, London is facing a hunger crisis, and it is crucial that we continue to propel the work set out by this inspiring charity. I’m proud to be involved in a project strengthened by the passion of its volunteers and the generosity of the artists.”

Oliver Barker, Chairman of Sotheby’s Europe, adds: “Since lockdown, I have had the pleasure of witnessing first-hand the phenomenal work of The Felix Project, delivering food parcels across London to help those in need of their most basic human rights – access to food. During these unprecedented times, it is certainly a great privilege for Sotheby’s to work hand in hand with the charity and Evgeny, supporting their mission via an auction of Contemporary Art. We are grateful to the artists who have generously contributed their works, and we’re looking forward to channelling part of the excitement of our major sales in London this month into a cause, which will provide help, food and comfort to the capital’s most vulnerable.” 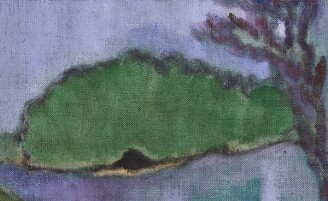