Chinese Calligraphy: Why the Old is New

T here was a point in history before printing when calligraphy played a huge role in daily communication. A handwritten letter not only could touch people in a memorable way but was also the primary method for business and administrative correspondence. In the modern digital age, the typed-and-printed page has succeeded good calligraphy as the new rule of etiquette. Calligraphy nevertheless continues to thrive as an art that informs the eye of designers and connoisseurs. A good page of Chinese calligraphy is not hard to learn to recognise. A few elements of style can be clarified with examples found in our upcoming 15 September auction.

Even those unfamiliar with the Chinese language can appreciate the elegance and sophistication of fluent brushstrokes. The above handscroll features an essay by Bao Zhao in which the author offers extravagant praise for the beauty of cursive script. The artist of the scroll, Wang Shouren, is regarded as one of the most influential Neo-Confucian philosophers in the history of China and was also a highly gifted calligrapher. More than forty colophons follow the artwork, most of which were written in the early 20th century when the handscroll was stored in the Yufeng monastery of Jiao Mountain. Many artists, art collectors, scholars and politicians who visited the Jiao Mountain between 1905 and 1931 were invited to view the scroll and leave colophons to attest its authenticity. Among them are famous names such as Duan Fang, Cen Chunxuan,  Liang Dingfen and Chen Zengshou, to list a few.

One of the principles of durable calligraphy is always legibility. Written at a swift pace, this calligraphy remains easily readable and lends its living energy to the contents of the page. Tang Yin was a gifted painter, calligrapher and poet known in Chinese art history as one of the four masters of Ming dynasty. The above artwork is dated 1519, four years before the death of the artist at the age of fifty-three sui. Calligraphy by Tang Yin from this stage of his life received influence from Mi Fu who was known for writing with brush strokes that enter and exit the characters in every direction. According to colophons by Yang Baoguang (1830-1912) and Luo Jialun (1897-1969) in the back of this handscroll, a landscape and figure painting once accompanied the artwork but have long since been lost. What survives is a series of fifteen seven-syllable quatrains composed by the artist himself, ten of which is outside the records of Liuru Jushi Quanji, the Complete Works of Layman Liuru compiled by Tang Zhongmian (1753-1827).

For the serious calligrapher, writing is a lifelong source of discovery and delight. The above album dates to 1628 when Dong Qichang was at the advanced age of seventy-three sui. He emulated calligraphy from the second volume of the famous Chunhua Ge Tie, which is an engraved compendium of letters from the imperial archives of the Northern Song Dynasty. Chunhua Ge Tie serves as an important model for students learning calligraphy. Dong Qichang with great reverence made many studies of Chunhua Ge Tie throughout his lifetime. He strived for the growth of his own ability through disciplined practice, the result of which is a personal calligraphy style teeming with variety, with handsome brushstrokes and letterforms that inevitably resemble its manuscript forbearers. His studies of Chunhua Ge Tie therefore cannot be viewed as slavish copies but suggests the work of an accomplished hand not only writing in honor of his predecessors but also wishing to be compared and remembered alongside them.

Calligraphy from the late Ming dynasty of China tends toward sweet and suave styles. The writing of Zhang Ruitu however is free from this fault. He often employed the side tip of the brush to create sharp folds, rhythmic modulations, and unexpected swaying in axis. His brushstrokes are therefore often described as carrying the power and weight of the thunderbolt Vajra, a legendary Buddhist weapon used to slay sinners. Zhang Ruitu excelled in calligraphy and his figure paintings are especially rare. This album of twenty-eight leaves was once a treasured possession of the famous late Qing dynasty art dealer Ha Shaofu (1856-1934) who pledged to neither loan nor sell the artwork within his lifetime. According to a colophon inscription by Yang Shoujin in the back of the album, “Japanese collectors once bid more than a thousand pieces of gold in exchange for the album, but were declined.” 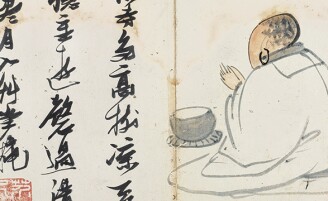