By Witt Kegel and Eleanor Sear

S otheby's Prints & Multiples auction on 4 April includes an extensive and diverse group of multiples by important Conceptual artists such as Joseph Beuys, Claes Oldenburg and Marcel Broodthaers. This collection demonstrates the underlying philosophy of these artists to drive the reception of fine art out of the sphere of elite society and into the realm of the masses.

Throughout his lifetime Beuys produced over 600 multiples, believing that these were a means of distributing his message to the widest possible audience. This theory of making art accessible was facilitated by the publishing house Vice Versand. Aiming to bring social equality to the ownership of art, Versand produced a mail-order catalogue of Contemporary art that had been produced in unlimited editions. In doing this, the publisher was beginning to break down the barrier that thus far had kept art ownership as a luxury attainable only by the wealthy and a pipe dream of the proletariat.

As much as these multiples are tied to Beuys' concept of art for revolutionary change, they also illustrate his part factual, part fictional biography. Beuys' self-fashioned persona blurs myth with reality and his life and work are full of extravagant anecdotes.  Ja Ja Ja Ja Ja, Nee Nee Nee Nee Nee , which consists of a tape recording encased in 21 felt squares, recalls the artist's story of his airplane crash on the Crimean front during the Second World War.

Beuys claimed that he was rescued by a Tatar tribesman who wrapped his body in felt and animal fat, and nursed him back to health. Beuys returned to this story in many works, employing felt in different forms throughout his career. Felt offered a symbol of rebirth and survival, not only for Beuys but for German society, and the state of art generally.

In Beuys' own words: "if you have my multiples you have me completely." 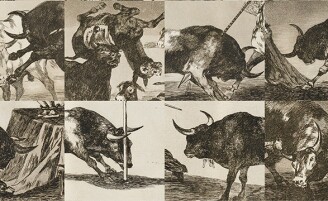