S trolling through a market in India in 1995, artist Bharti Kher was struck by a woman's sperm-shaped bindi and immediately asked her where she bought it. Kher made her way to the shop and asked for all of their serpent-shaped bindis and twenty-two years later, still purchases the bindis – which have become synonymous with the British-born artist's work – from the same shop.

Derived from the Sanskrit word bindu, meaning dot or point, red bindis, a Hindu reference to the third eye, were traditionally worn between a woman's eyebrows as a symbol of marriage. As Eastern culture meshed with the Western world in recent decades, it has become a fashion accessory worn by unmarried girls and women of any religion. Early on, Kher noticed that at the end of each day, women would transfer their bindi from their forehead onto the bathroom mirror. In an interview, Kher reminisced on how bindis acted as one woman's third eye throughout the day, and then it would rest on the mirror for safekeeping at night.

Kher's visual language has drawn immensely from this observation. Using bindis as her pigment, Kher creates dynamic compositions arranged on the surface of a mirror. Echoing Vincent van Gogh's celebrated masterpiece The Starry Night, she captures the dynamic swirling in her own Starry Night After V.G. Between the glowing movement of the colourful bindis, small spaces allow the reflection of the mirror to show through. This sense of turbulence is perhaps a reflection of the artist’s negotiation of her position and the issues she presents in her work, such as social roles, traditional rituals, gender relationships and popular culture of India.

As part of her artistic process, Kher carefully smashed the glass, creating dents and circular ripples similar. The resulting broken mirror looks like a bullet could have shot the surface. She then decoratively layered bindis on top of the mirror, following lines created by chance. In the interview, Kher said when the bindis start to appear on top of one’s broken reflection, the reflection morphs from a double image to a triple image, and each reflection then has a third eye. The surface is interrupted so that every reflection is a fragment or distortion, obliterated by cracks and bindis. She says in some way, this work is very seductive and suffocating. It will drown a person, their individual reflection and the reflection of their surroundings, and then when they turn away from it, they can come back for air.

The broken mirror is seen as symbolism for bringing bad luck. Kher celebrates breaking mirrors in her art as a physical act of defiance and mischief. She can break the mirror while challenging people’s ideas of what a broken mirror means because at the end of the day, it's her bad karma, not theirs. 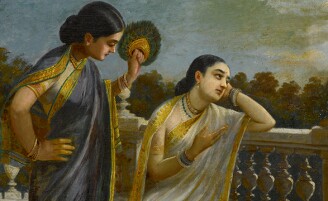