An Exceptional Opportunity for Carpet Connoisseurs

I always marvel at the vast scope of exceptional goods that come through our doorway at Sothebys. While we are best known for selling paintings, some highly unusual or rare historical items are also brought to us, and I have had the privilege of seeing at close quarters objets, textiles, manuscripts, carpets and other artefacts of museum quality which some discerning collector was subsequently able to acquire from our sales. One such golden opportunity – alerting all carpet lovers world-wide! – are the group of distinguished collections, including that of Abdi Roubeni's, coming up for sale as part of the Rugs and Carpets auction on 1 November. Highlights throughout the sale pictured here, including Abdi's camel hair Feraghan (Lot 117) and Saber Mashad carpet (lot 126).

With regard to the Roubeni collection; Mr Roubeni, in the twilight years of his triumphant career in the oriental carpet world, has finally decided to take life a little easier. Two dozen of his treasured rugs and carpets will now go under the hammer, having very successfully auctioned the first part of his collection in London in 2010.

Abdi Roubeni, in the twilight years of his triumphant career in the oriental carpet world, has finally decided to take life a little easier. Two dozen of his treasured rugs and carpets will now go under the hammer, having very successfully auctioned the first part of his collection in London in 2010.

Born in Mashad in 1932, Abdi Roubeni has been active in the carpet trade for almost 70 years.  As a very young man of 13, he left home for Tehran, where he initially sold ladies’ clothing – then in 1948, aged only 16, he left Iran for India to seek his fortune.  A family contact in the carpet business, Haji Aga Eliasoff, who counted His Highness Bhupinder Singh amongst his clients, as well as the fabulously wealthy Maharaja of Patiala, was able to provide introductions, but Roubeni had to begin at the bottom, literally selling door-to-door.  His boundless energy and enthusiasm saw his business grow and his client list expanded to include both members of India’s aristocracy and the international community.

Leaving India in 1957, he moved to Hamburg in 1958 where, with his brothers Albert, Parviz and Hekmat, he developed the company over the following decades into one of the most significant suppliers of hand-knotted rugs and carpets to the European retail trade.  Meanwhile, when he found exceptional pieces, such as his extraordinarily fine Saber carpet, or the part-silk Tehran prayer rug in near mint condition, he carefully stored them away. Abdi hopes these pieces, amongst the other superb ones he has collected, will provide as much pleasure to their new owners as they have to him over so many years.

Harry Grenfell, the specialist involved with this landmark sale, says: “The most important thing about the sale is the wonderful spread of works within it, which not only span across the greater part of the ancient trade routes, running East to West, but also cover a period of almost 400 years with both important and distinguished classical rugs and carpets to the intricate and beautiful workshop pieces of the 20th century.

“For me, one of the more interesting works is a silk rug (lot 68) which we attribute as Persian, however it is inscribed in Arabic,  fi dar al-sina'ah al-hindi, 'In the House (or College) of Crafts of India'. From a research perspective this is fascinating as there is no clear reason why there is an Indian reference since silks of this nature were not, as far as we are aware, being produced in India at that time. Also the signed Saber carpet (lot 126) which, whilst more straightforward to research, is amazing as it has in excess of 20,000,000 knots in its construction.”

At the turn of the 20th century there was a resurgence of grand, highly refined, carpet weaving in Mashad; Abbas-qoli Saber was one of the masterweavers who pioneered the revival of workshops producing superior quality pieces. A former student of the great master Amoghli, Saber was renowned for his skill and completed commissions both for Eastern and Western officials. The carpets he produced have a richness of palette, using the finest of wools, and are inspired from great classical carpets of the past. Roubeni purchased this particular carpet with the assistance of Gholam Ali Kirmanshahi, a highly respected carpet broker in the Bazaar in Tehran.  By repute, it had come from the collection of Fawzia, Queen of Iran from 1939-45 as the first wife of Mohammad Reza Pahlavi.

Exquisite carpets of such fine workmanship are the masterpieces of a fast-vanishing industry where supply of these treasures are as limited and rare as any other historical artefact we preserve in museums. It is to be hoped that connoisseurs with an eye for the significance and beauty of artefacts spanning the vast geography of the Silk Road, will earmark this sale and look forward to its precious offerings with anticipation.

The Rugs & Carpets sale is in London on 1 November. 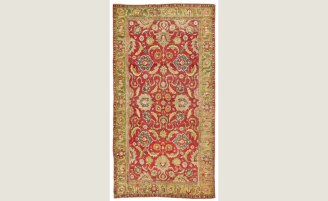