A compelling reason to scour auction house sales is the opportunity to come across rare, once-in-a-lifetime opportunities for acquiring unique pieces. One such exceptional item is being presented in the current Arts of the Islamic World & India including fine Rugs and Carpets sale to be held in London on the 31 March.

From a European Private Collection and never previously offered for sale, is a stunning Safavid carpet with Shi’ite inscriptions, belonging to a sub-set of a group - some thirty-five of which remain in the Topkapi - on offer for the discerning buyer. These ‘Salting’ or ‘Topkapi’ group of rugs remain in bright, unworn condition, having found their way into private and museum collections in the last quarter of the 19th and early 20th centuries. In discussing how so many of these rugs, sixteen of which have Shi’ite dedications, survived in the Topkapi holdings, historian and expert Michael Franses suggests ‘the vast majority of the 16th-century Safavid niche carpets that survive today are the results of royal gifts preserved in the Ottoman Royal Treasuries. Many were literally rolled up and left quite unused in the storerooms from the time they were given possibly until the siege of Istanbul during the Turco-Russian wars three hundred years later, when several were probably sold off.’

With an unassailable pedigree, a carpet of such provenance, distinction and condition would grace any collection or home in recognition of the renewed worldwide interest in fine rugs. What better way then, to pay tribute to this art than to preserve each of them in the suitable environment they deserve. Recalling the palaces and monuments which originally housed these glorious creations, today’s owner can treasure the opportunity of being custodian to a work of a bygone art. 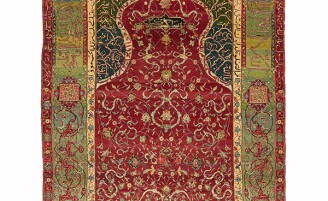