D aughter of the founder of Editions Arthaud, with a degree in Art History and Archaeology, Claude Arthaud had a lifelong need to stray from the beaten track and bring back and transmit the fruit of her explorations, with originality her driving philosophy. At 25, during a two-year archaeological expedition in Central America alongside her future husband, she became one of the first French women to live among the Jivaro people. At the end of the 1950's, this time as a journalist, a second journey led her to the People's Republic of China and Mongolia, at a time when access to the Mongolian steppes was forbidden to Westerners. She wrote of her travels and discoveries in both the press and in several books.

Claude Arthaud also launched several collections of publications on the visual arts and was at the origin of certain issues of the revue the Instantanées de Paris with contributions by Robert Doisneau. Passionate about contemporary art, in 1967 she asked Arman to illustrate the cover of her book, Les Maisons du Génie, with one of his violins.

The book covered 29 homes of the writers and artists who were emblematic of European creative genius. In 1970 in Les Palais du Rêve, a collection of baroque palaces and exceptional residences, she devoted an entire chapter to the fantastical houses of "Le Rêve de l'Oiseau" built by Niki de Saint Phalle, an experience that marked the beginning of Arthaud’s long friendship with the artist.

These two literary works, where the extravagant and the marvelous rubbed shoulders, and her adventurous personality, at once nonconformist, always seeking the unexpected, yet still attached to tradition, brought her friendships with many artists whose works she would collect.

From the 60s to the 80s, she was particularly close to Niki de St Phalle, but also to Tinguely, César and Arman, who were also in search of their own Nouveau Réalisme. She interviewed and received international artists such as Rauschenberg and Salvador Dalí in her home, which became renowned as a meeting place for cultural figures visiting Paris.

In her private townhouse in the Rue de Grenelle, she liked to organize typically Parisian soirées, known for their whimsical and offbeat atmospheres. Her guests; publishers, writers and artists were encouraged to give free rein to their creativity for the evening. It was during one of these themed parties, Le Bal des Fantasmes, that Andy Warhol, the father of Pop Art himself made a notable appearance joining his friends and artists of the time, his presence forever immortalized in L'œil de Vogue. 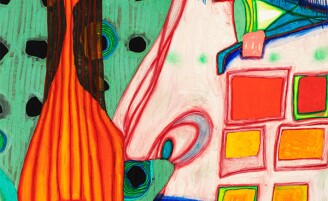