By Sotheby's
A work by radical expressionist painter Egon Schiele will feature in Sotheby’s Impressionist & Modern Art Evening sale on 26 February. Read on to discover more about this extraordinary master and his 1912 work, Triestiner Fischerboot.

E gon Schiele's untimely death at the age of 28 cut short an artistic career of exceptional promise. In the wake of a series of exhibitions marking the centenary of his death, Sotheby’s is set to celebrate Schiele’s extraordinary power this February when a fascinating work by the Austrian artist comes to auction for the first time.

Painted in 1912, Triestiner Fischerboot (Trieste Fishing Boat) holds a unique position in Schiele’s oeuvre and was created in the aftermath of one of the most tumultuous and life-changing experiences for the artist. Recently released from brief imprisonment in Neulengbach in Austria, and rejected by the local community there, Schiele visited Trieste in 1912, driven by a desire to escape the grim memories of his recent past, and relive fond memories of earlier visits shared with his beloved sister Gerti in 1907 and 1908.

It also unleashed a spate of radical new artistic expression. In a year of iconoclastic developments across Europe that forever altered the direction of twentieth-century art, from Cubism, Orphism and Futurism to Expressionism, Schiele sought to explore in oil a thoroughly modernist treatment of colour, surface, pattern, texture and form. Offered at auction now for the first time, having been in a private collection since 1962, Triestiner Fischerboot will be offered as one of the highlights of Sotheby’s Impressionist & Modern Art Evening Sale in London on 26 February with an estimate of £6,000,000–8,000,000.

Adopting a square format for this work, Schiele challenged the traditional notion of perspective in landscape painting. Instead of creating a foreground and background, he transforms the canvas into a composition of patterns and clearly delineated forms with little or no reference to perspective. In this he was indebted to Gustav Klimt, his friend and contemporary, who had been using the square format for his landscapes since the closing years of the nineteenth century, around the same time Claude Monet started using a square canvas for his depiction of waterlilies. The painting’s vertiginous, flattened and closely-cropped perspective and bold use of bright patches of pure colour are a distillation of Schiele’s reorganisation of form within the melting pot of European avant-garde painting.

It is of the utmost necessity that you finally come to visit Trieste! […] I am currently sitting at the café of this new large hotel at the pier; it is teeming with noble, pure, luscious colors – tremendous!

Letter from Egon Schiele in Trieste to Anton Peschka in Vienna, May 1912

In the summer of 1911 Schiele and the model Wally Neuzil had settled in Neulengbach seeking inspiration, but Schiele’s bohemian lifestyle scandalised his conservative neighbours. The couple found themselves in a precarious position when a retired naval officer’s daughter asked for their help to run away and although they returned the girl to her parents, the artist was arrested and placed on trial. The experience and particular loss of freedom it entailed was to have a marked effect on Schiele’s life and work. Drifting in what appears to be an open sea, the boat in this painting can be seen as a powerful symbol of the artist’s state of mind, conveying the same haunted vision expressed in the artist’s portraiture.

The painting’s first owner was Heinrich Böhler, from a family of known patrons of the arts, who was introduced to Schiele in 1914 by Josef Hoffmann, the celebrated architect and founder of the Vienna Seccession. Soon after, the artist took on Böhler as a student but their relationship encompassed far more than merely master and pupil: Böhler would go on to supply Schiele with paints, canvas and models, and become a dedicated collector of his work. 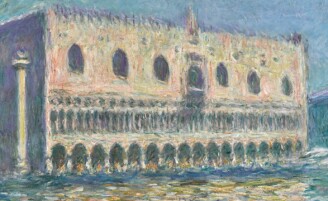