A Qianlong Teapot: The Scholar in the Forbidden City

NEW YORK – The Qianlong emperor (1711-1799) was undoubtedly one of the greatest emperors of the Qing dynasty (1644-1911). Following the tradition of his predecessors, the emperor was immersed in the study of Han-Chinese culture at a young age. The Chinese literati tradition, which is characterised as being free and spontaneous, rooted itself deeply in the mind of the emperor; however, as the supreme ruler of China and the mandated Son of Heaven, the Qianlong emperor was restrained by highly formalised protocol and guidelines in his daily life. His inner literati spirit clashed with his divinely bestowed role of emperor. The literati within was forced to submit to traditional expectations. The below teapot, which will be offered in Sotheby’s Important Chinese Art sale on 13-14 September, provides a poignant visual example of the emperor’s literati longings.

The Hui Spring referenced in this imperial poem is located in the Hui Mountain, Wuxi, Jiangsu province. This pure natural spring water was appreciated by scholars since the Tang dynasty (618-907), when it was recorded in Chajing [The Classic of Tea] by Lu Yu (733-804), the highly respected ‘Sage of Tea,’ who ranked it second among all natural springs.

During the Ming dynasty, a well-known monk named Pu Zhen, zi Xinghai from the Hui Mountain Temple, commissioned artisans from Huzhou, Zhejiang province, to make a bamboo brazier. Using this unique brazier, he served his guests tea made with water from the Hui Spring. Over many years it became a tradition for scholars to gather at the Hui Mountain Temple to liberate their literati spirit through drinking tea, writing poems or painting landscapes. The paintings and writings left by these scholars were later compiled into several scrolls and were given the name Zhulu tuyong [Compendium of the ‘Bamboo Brazier’]. These scrolls, together with the bamboo brazier, were regarded as the two treasures of the Hui Mountain Temple.

The Qianlong emperor learned about the Hui Spring and the treasures of the Hui Mountain and visited during his Southern Inspection Tours. He was served tea prepared on the bamboo brazier whilst admiring the handscrolls, and later, he composed the poem inscribed on the present teapot to commemorate his visit.

THE TEAPOT IS INSCRIBED WITH AN IMPERIAL POEM.

The imperial poem is accompanied by an illustrative painting. It depicts an idyllic outdoor scene reminiscent of classical Chinese scholar paintings; it details a partially hidden pavilion, an overhanging pine tree, a pathway meandering alongside and over water, leading to a garden with a circular gate, a scholar sits at a stone table admiring an open handscroll while an attendant serves him tea brewed by a second assistant some distance away. The retreat is a reservoir of calm inviting introspection and revelation. The poem suggests that this idealised depiction was intended to represent and memorialise the Qianlong emperor’s visit to the Hui Mountain Temple.

The representation of the emperor as a scholar places the Qianlong emperor amongst all other famous scholars who visited the Hui Mountain in the past; it also shows the emperor’s desire to live a simple, yet free life in a reclusive retreat – a conceptual state-of-mind pursued by all literati.

THE TOP OF THE TEAPOT.

The sense of freedom and tranquillity observed from the scholarly scene on the present teapot is confined within a formal rendering of typical auspicious imperial motifs found on Qing imperial porcelains. Although highly refined, this decoration clearly lacks a sense of freedom and spontaneity; instead, it reflects a sense of order, which constitutes one of the essential principles of imperialism. The combination of the two contrasting elements on the present teapot perfectly relates the necessary duality that defines the essence of the ideal emperor who embraces both his free literati spirit and yet allows it to be confined within proscribed ceremonialism and the imposing walls of the Forbidden City. 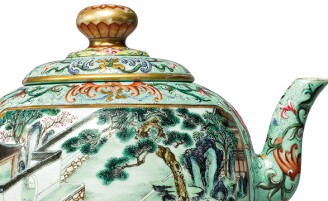