A Museum Lovers' Guide to Venice Beyond the Biennale

T he world’s oldest and most prestigious art biennial launches again this May in Venice with Ralph Rugoff, director of London’s Hayward Gallery, at the helm. The 58th International Art Exhibition ( 11 May–24 November) is entitled May You Live in Interesting Times, a reference to periods of crisis and suffering.

Rugoff has said that the show “will not have a theme per se, but will highlight a general approach to making art and a view of art’s social function as embracing both pleasure and critical thinking”.

National pavilions not to miss include Great Britain, which is featuring the conceptual artist Cathy Wilkes, and Ireland, which is showing works by the sculptor Eva Rothschild. Meanwhile, Naiza Khan represents Pakistan in the country’s debut appearance at the event.

Coinciding with the biennial are numerous other must-see exhibitions dotted around the city’s palazzos, churches and synagogues. This year’s offerings range from 18th-century Venetian masters at the Palazzo Ducale to a dramatic show of new works by Sean Scully located on the island of San Giorgio Maggiore.

Canaletto and Venice, Palazzo Ducale, the Doge’s Apartments, through 9 June

Eighteenth-century Venice comes to life in an exhibition of works by leading artists who presented La Serenissima in a new light. These pioneers include Luca Carlevarijs, whose oil sketches depicted the city’s bustling urban life, and Rosalba Carriera, who is known for her subtle and lustrous oil pastel portraits. The main attraction, however, is Canaletto and his detailed and evocative vedute (views) of Venice. Significant works on show include Il Bacino di San Marco, circa 1738, from the Museum of Fine Arts, Boston, and Il Canal Grande da Santa Chiara verso Santa Croce, 1730s, from the Musée Cognacq-Jay in Paris.

“It has been 25 years since so many masterpieces of 18th- century Venetian art were brought together,” says Alberto Craievich, the show’s curator. “This [century] was a period of great complexity and value, of excellence in the fields of painting, sculpture and decorative arts.”

Over the past 60 years, German artist Georg Baselitz has been remarkably prolific, producing paintings, drawings, prints and sculptures featuring familiar motifs such as eagles and woodsmen. The Spanish art historian Kosme de Barañano draws on this wealth of work for a landmark show at the Gallerie dell’Accademia, in the first exhibition dedicated to a living artist at the venerable 18th-century institution.

“Baselitz’s painting at the turn of the 21st century offers us a body of work that is completely original,” de Barañano says. Arrival, 2018, is the latest in the artist’s disorientating series of upside-down paintings, while a 1975 work, Bedroom, reflects Baselitz’s Neo-Expressionist style.

The soak-stain technique of her Mountains and Sea, 1952, profoundly affected the work of the so-called Color Field painters of the 1960s and 1970s. Her influence waned as this abstract style fell out of favour, but, according to Elderfield, “a wide range of younger artists, especially women, have picked up on its possibilities over the past 20 years”.

The exhibition, he says, highlights her links to Venice, “with the rich painterly canvases showing how much she loved the paintings of Titian, Veronese, Tiepolo and others”. 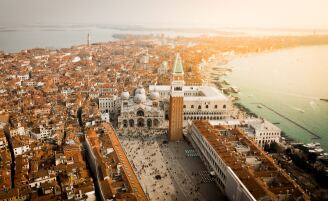 The Italian artist Alberto Burri worked with wood veneer, sheet metal and industrial plastics, earning him the label “the master of materials”. This chronological exhibition features around 50 works, including those created on burlap, an inexpensive woven cloth, as well as Rosso Plastica M3, 1961, and Nero e Oro, 1993.

This vast, 80-strong survey of Gorky’s art explores his Cézanne period of the 1920s, when the Armenian created numerous canvases inspired by the French painter’s landscapes. Later works include those made in the Connecticut and Virginia countryside. Among the highlights is the drawing Nighttime, Enigma and Nostalgia, 1931–32.

The ceramicist Edmund de Waal shows
new works in porcelain, marble and gold at a 16th-century synagogue. For the second part of the exhibition, he unveils a library of books by exiled writers at the Ateneo Veneto space. “[This project] is about exile; what it means to have to move to another country, to speak another language,” de Waal says.

Irish artist Sean Scully shows several new works in the grand setting of the 16th-century Benedictine church, including Opulent Ascension, a sculpture constructed from stacked frames, each wrapped in rich and varying colours of felt. A triptych called Madonna marks a return to figuration for the artist. 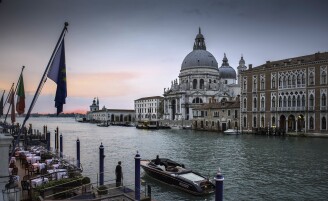