A Meditation on Beauty in Fragments

By Johannes Pong
Statues representing the Buddha are instinct with teachings of compassion or wisdom. Every detail of the figure holds that concept, from the folds of the cascading robes to the bared chest. The ample cheeks, the effulgent curves of the lips, the gently hooded eyelids, each part is the whole itself.

Beauty is like God; a fragment of beauty is complete.

French sculptor Auguste Rodin famously admired and studied sculptural fragments of bygone classical cultures, because each piece is on its own a complete work of art. Similarly for Buddhist art, every part contains the central idea, each feature is in itself an object of devotion, and every detail can be the focus of meditation.

Meditation. The restless mind cannot bear to slow down. Even millennia ago, without the incessant LED and neon-lit technological distractions of modern life, narratives of the past and anxieties over the future would bombard and overwhelm the consciousness. In the full sensuous face of Shakyamuni Buddha, arched eyebrows flank a central recess for an urna. Gazing upon a part of the statue, the heart quiets the mind, taking a journey of slow breaths to arrive, at three, in the present to dhyāna, one-pointed concentration.

Such concentration might be a form of devotional practice – not idolatry but a powerful expression of reverence. Devotion, or its cultivation, may involve active rituals such as bowing or making offerings of incense, food and flowers. It may also be as simple as a soft gaze upon on the Buddha’s serene Central Asian face, the cast of his bow-shaped eyes, and the prominent ridge of the nose. Consider the abundance of curls tightly arranged along a domed head. Observe the exquisitely forlorn folds of fabric falling casually from the shoulders of a sage.

Perhaps the attention settles on something that once existed but has disappeared – a missing part. Like the fragment of beauty which is itself complete, so is this unfilled space. Within the warm, weathered wood, those deep shadows create the possibilities of the sublime, allowing us to abandon our selves to a past now lost. 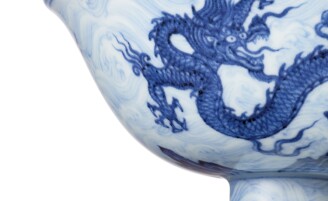