A History of the Nude in 10 Works

When he published his ground-breaking thesis The Nude: A Study in Ideal Form in 1956, the great art historian Kenneth Clark offered: "The English language, with its elaborate generosity, distinguishes between the naked and the nude. To be naked is to be deprived of our clothes, and the word implies some of the embarrassment most of us feel in that condition. The word 'nude', on the other hand, carries, in educated usage, no uncomfortable overtone. The vague image it projects into the mind is not of a huddled and defenceless body, but of a balanced, prosperous and confident body: the body re-formed."

The Venus of Willendorf is the earliest known image of a naked female form, and dates from 28,000-25,000 BC. Standing at just 11cm tall, the figure was discovered by Josef Szombathy in 1908 during archaeological excavations at a site in Lower Austria, and subsequently identified as a fertility symbol. The voluptuous, totemic figure was carved from limestone and tinted with red ochre at the time of its creation, and it is believed that the object was one of ceremonial importance to the Palaeolithic community from where it originated. Archaeologists and historians have long-debated the lack of facial features, demonstrating that the creators employed very different visual codes and symbols. The classification of conventional 'beauty' that we recognise today would not have existed in the same form. Different conventions and motifs would have resonated with the people who produced and owned these figures.

2. A Giant Among Men

First conceived in 1501 and finally completed in 1504, Michelangelo's David stands at an imposing 5.16 metres and is carved from a single block of white marble, sourced from the quarries of Carrara in Tuscany. The sculpture, which has several replicas around the world, is perhaps one of the most famous images, not only in the history of art, but in history itself. At this time, Western art was predominantly devoted to the depiction of biblical stories and allegories, and Michelangelo's masterpiece is no exception: devised as a portrait of David as he prepared to face the might of Goliath.

His posture is defiant as he confidently stands in the contrapposto, a pose employed by artists in their depiction of figures throughout the renaissance, right up to the present day, as seen in the work of Andy Warhol and Rineke Djikstra: weight placed on one leg, a slight twist in the torso. Other representations of the story had traditionally shown David after the fight, but Michelangelo chose to show his heroic protagonist poised in anticipation for battle. The exhibition Michelangelo: Divine Draftsman and Designer is currently on display at the Metropolitan Museum of Art, New York.

3. The Garden of Eden

In the centuries that followed the creation of this iconic tableau, the fig leaf become a symbol of chastity and modesty, used to protect and shield the reputations of mere mortals, in art, literature and fables. Cranach's Adam and Eve is a wonderfully seductive image in more ways than one; Adam and Eve are surrounded in the Garden of Eden by a perfectly blue sky and the tree bearing fruit. There is a slight sense of tension in the frame as even the animals avert their gaze from the central figures, engaged in a forbidden act. This was a daring painting for Cranach to unveil, depicting the very moment of temptation at the Tree of Knowledge of Good and Evil. At the time of its creation, Cranach was at the pinnacle of his profession. Adam and Eve went on to inspire countless versions by artists around the world, which often borrowed elements of Cranach's composition, reinforcing this work's position as an iconic narrative painting, deeply significant in the story of western art.

In 1863 Manet completed perhaps his two most famous works Olympia and Le Dejeuner Sur L’herbe and in doing so was credited with the very creation of Modernism as we know it today. That the central figure in Olympia was nude, was not the controversy when it was first unveiled; it was more the defiant nature of her straight-on gaze, and the relaxed, reclined pose which to many was indicative of her self-confidence; a trait not favoured or encouraged in the refined women of 19th century high society. Olympia was certainly no demure damsel, but a strong-willed muse aware of the sexual power she held over her observer. By contrast, her servant looks away and proffers flowers, perhaps a gift from a suitor, though they are of little significance to Olympia.

Much has been made of the inclusion of a black servant in the picture, and it is only within the latter half of the 20th Century that academic appraisals of the work began to include race as factor, and not merely class. The pose alludes to earlier works by Titian, Ingres and Goya who all produced their own idealised versions of Venus, so in borrowing compositional tools from his predecessors, he calls these classical works to mind. Rather than portraying a nude figure from a biblical parable, as would very much be the convention at this time, Manet chose instead to paint a prostitute; elevating her to position of central importance in his picture. The reaction to the work among his contemporaries and patrons was one of shock and repulsion, prompting one critic to denounce the work as "immoral".

American artist Man Ray played a pivotal role in establishing Surrealism in the canon of Modern art, and it was behind the lens of his camera that he made his contribution to the movement. This risqué yet playful photograph of two artist's wooden mannequins engaged in an explicit act is all the more shocking because of the everyday, functional nature of these educational objects. These models are typically used by art students to measure proportion and perspective, and to create anatomically correct drawings of a figure. One might expect these models to be standing proud in the pose of a classical sculpture, but Man Ray, ever keen to subvert, marries sculpture and photography to question convention.

As one of the founding figures of the Cubist movement, Pablo Picasso was a pioneer in the abstraction of the human form. His seminal work 1907 work Les Demoiselles d'Avignon was seen as a significant moment in the advent of Analytical Cubism. The later Synthetic phase would see many painters and sculptors building on this unconventional method of recording subject matter on converging picture planes. Influenced by the earlier experimentation of Paul Cézanne, Picasso, Georges Braques and Juan Gris began to radically reinvent the rulebook on composition and figurative painting.

Elements of an object, landscape or body were visually dissected and reassembled on the canvas in syncopated, energetic forms. Though executed in 1971, Homme et femme nus recalls Picasso's experimentations in the first half of the 20th Century. Angular and expressive, the drawing shows two figures merging in a highly-charged, sensual image. Picasso relationships were well documented, and the women he was involved with romantically often became the subject of his work. Like many artists, his personal life permeated his work, and Picasso was explicit about this; exploring his initial liaisons, developing fascinations — and sometimes even the demise of a relationship — on canvas. A major exhibition, Picasso 1932 – Love, Fame, Tragedy, including more than 100 works opens on 8 March at Tate Modern in London.

In Monica Sitting with Mondrian, Wesselmann demonstrates the simplicity of line typical in his work, omitting the facial features of his subject and leaving her in a suggestive pose. Reminiscent of the advertising illustrations in the 1960s, Wesselmann provides his viewer with minimal visual information, yet still creates a provocative and daring image. As one of the leading figures of Pop Art, Wesselmann's Great American Nudes series was a key body of work produced during the 1960s, alongside Andy Warhol's screen printed works and Lichtenstein's visual references borrowed from comic books. In their adoption and appreciation of these 'everyday' printing techniques, they openly acknowledged the importance of the mass-produced image. These pioneers of the Pop movement developed a provocative and unapologetic approach to image-making that challenged the art establishment.

Robert Mapplethorpe's name is synonymous with black and white photographs of the male form, that are considered to be among the most iconic, classic images of the human body. With incredible depth of tone — from deepest black to whitest white in the shadows and highlights, Mapplethorpe's works are reminiscent of the great American Masters Ansel Adams and Walker Evans, who turned their cameras on the wilderness and the mountain ranges of the American West. Prior to the advent of modernist photography, a painting or sculpture of the human form was widely regarded as more worthy of admiration, as it was one step removed from real life. A photograph was considered infinitely more shocking than a painting. Mapplethorpe's photographic explorations built on the theory and practices of his Modernist forerunners, and he developed a sculptural approach to his images. His sitters included Grace Jones, Andy Warhol and his muse, lover and long-time collaborator, Patti Smith.

Read about Mapplethorpe's photographic homage to the Greek God Antinous.

Popularised by the rise of magazines such as The Face and i-D, photographers such as Wolfgang Tillmans, Juergen Teller and Corinne Day began to photograph fashion as a documentation of counter-culture. The editors of these magazines realised the interesting stories and trends were emerging on the streets of ordinary towns and cities around the world, and were not necessarily the reserve of the big-budget studio campaign photographers. Rather than deifying models, blemishes, wrinkles and hairs all became part of the 90s no-frills aesthetic — in a direct contravention of the high fashion code typical of glossy magazines where bodies were revered in their retouched, aspirational glory. This DIY approach to photography was pioneered by Tillmans, who often shot his friends on nights out, and after-hours in the flats, studios and squats in the East End of London.

Photographer Chris Levine has photographed some of the most iconic faces of the 20th Century including Kate Moss, the Dalai Lama and a commissioned portrait of Queen Elizabeth II, which graced the cover of Time magazine on the occasion of her Diamond Jubilee. In this lenticular image, Kate Moss is styled as she might be for a glossy magazine; slickly-styled with a brightly hued background mounted on a lightbox. Levine is known for bringing a quiet serenity to his subjects, often pressing the shutter when their eyes are closed — placing the viewer in the position of voyeur. Levine's work examines the potential of light through the use of reflective surfaces, neon, lasers and holographic elements to construct futuristic images that  capture the movement and structural qualities of light on film. 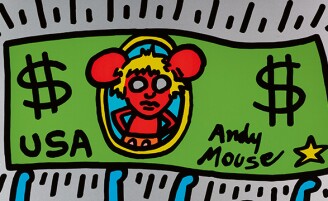