By Sotheby's
Sotheby’s upcoming sale, Style: European Silver, Ceramics and Objects of Vertu on 22 May will see an array of magnificent objects brought to auction, representing the pinnacle of European craftsmanship. Among them is one remarkable 19th century snuffbox, read on to find out more.

T his theatrical gold, enamel and pearl snuff box was made in Geneva around 1800 and its lid was painted with a romantic Italianate view by Jean-Louis Richter (1766-1841), among the best and best-known of Geneva enamel painters on watch cases, automata and snuff boxes. As the inscription on the interior of the lid describes, it was later presented, in 1835, to Dr Martin, then ship’s surgeon on board HMS Hastings, a British naval vessel, then stationed at Lisbon. While there Dr Martin had acted as one of the signatories to the autopsy of Prince Auguste, Duke of Leuchtenberg (1810-1835) who died suddenly following his marriage to the fifteen-year-old Dona Maria II, Queen of Portugal.

The present sale includes objects from two of her most outstanding collections, that of minerals – from childhood she had been fascinated by the hardstones of her native Saxony – and of portrait and landscape miniatures (part II of this collection to be sold by Sotheby’s in July 2019). With her usual perspicacious thoroughness, Dr Pohl did not acquire just one rare gold and enamel box signed by Richter but the four examples to be found in this sale (lots 464-467).

Of these, the box seen here perfectly typifies Richter’s work at this date and, more generally, the art of the Geneva enamel painter. Richter’s father, an engraver from Frankfurt, had settled in Geneva in 1766, being formally received as habitant on 7 February 1766, a week before he married Françoise-Colette Pelaton; the eldest of their five children, Jean-Louis, was baptised on 25 August of the same year.

The family lived in the parish of Saint-Gervais among the multitude of workers in Geneva’s Fabrique, a community that produced a large part of Geneva’s wealth at the time by manufacturing everything needed for its flourishing export trade in watches and bijouterie. The young Jean-Louis was apprenticed in 1778, at the age of 12, to the brothers Philippe-Samuel-Théodore (1756-1805) and David-Etienne (1758-1832) Roux, enamel painters, for a term of 6 years and remained in Geneva supplying exquisite painted enamels to the Fabrique for the next forty years. His work drew upon many different engraved sources, often combining elements from several different prints into one painting. His Italianate views, taken from Vernet, such as the present example, were apparently also very popular with the Ottoman market. De Saussure’s first ascent of Mont Blanc in 1786 and the Romantic interest in awesomely dramatic mountain scenery led to Richter’s development of the Alpine landscapes for which he is most famous. Indeed he is credited with being the first artist to use an engine-turned ground under translucent enamel to represent the shimmering rosy effect of a sunrise or sunset seen behind the mountain tips.

It is certain that in his long career, Richter produced many more works than he signed. These enamel paintings which most surely came from his own hand are cherished for their quality and rarity by collectors. The present signed box is not only beautifully painted but has the added charm of being presented as a scene from the theatre with its curtains forever open for a discerning audience to admire. 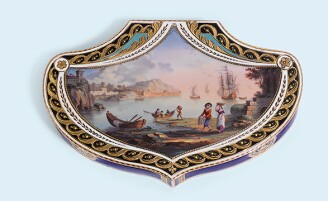