7 Things You Need to Know About Alfredo Volpi

A n exhibition of works by celebrated painter Alfredo Volpi is on view at S|2 Gallery from 16 February–29 March. Volpi was one of the most significant artists working in Brazil in the 20th century. The exhibition features works from his mature and most stylistically assured period, from the 1950s to the 1970s.

1. Alfredo Volpi was born in Italy, but his family moved to Brazil when he was two and he lived in São Paulo for the rest of his life. He eventually became part of the informal collective Grupo Santa Helena in the 1930s, many of whose members were also Italian immigrants, and whose formation was in part a reaction against prejudice towards poor immigrants.

2. Growing up in a working class district of São Paulo, Volpi began working as a carver and bookbinder as a young boy, developing his skills until he began painting. His first artistic work dates from 1914, when he was 12 years old. It’s possible that his fondness for simplicity and purity later led him to avoid association with the established visual arts milieu.

3. Volpi began to paint in his free time in the 1930s, and at first turned to subjects that were immediately available. He painted Cambuci, his neighbourhood, and the surrounding area. It was only towards the end of the 1930s that he began to develop his signature style.

4. His distinctive and colourful style brought together his love of painting with an occupational interest in architecture that pushed at the boundaries of established modern practices. He created naïve yet erudite compositions distinguished by a linear emphasis of form that held a special place in the evolution of geometric abstraction at this time, and occupy a place between Brazilian Modernism and later experimental art of the 1950s and 60s.

5. The trademark vibrancy in Volpi’s work transforms the detail and nuance of everyday life —his surroundings, and local landmarks — into a geometric urban dialect. He said of his own work: ‘I always painted what I felt, my painting was gradually transforming, it started with nature, then it slowly got out, sometimes continuing, I never think about what I am doing, I think only about the problem of the line, of the shape of colour. Nothing else.’

6. In the late 1940s and throughout the 1950s, Volpi began depicting the facades of buildings and traditional flags. The flags were bandeirinhas, associated with Brazilian folklore and popular at Brazilian festivals, and so served to culturally locate his work. The flags and facades transformed landscapes into abstract patterned compositions.

7. Volpi won the Grand Prix for Brazilian painting at the São Paulo Art Biennial in 1953. He was the joint winner with Di Cavalcanti, who dismissed Volpi as a “flag painter”. Volpi went on to become one of Brazil's most important 20th century painters. 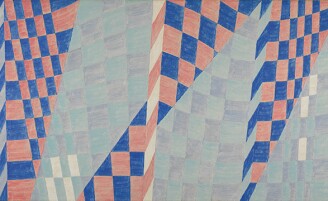