5 Things to Know About Renate Bertlmann

Sotheby's S|2 Gallery in London will soon launch a new programme, beginning with two solo presentations of works by Austrian artists Maria Lassnig and Renate Bertlmann on the 27 April. With the continual growing interest in re-examining artists of the post-war period, artists like Lassnig and Bertlmann have become more prominent on the international stage – and beyond their home city of Vienna. Here, we introduce the key themes from Renate Bertlmann's work.

In 1978, a pregnant-looking Bertlmann sat in a wheelchair in a Viennese gallery. She wore a wedding dress and grotesque mask. Her chair had the words: "Please Push!" on the back – and when someone followed that instruction, a lullaby played. When the pusher stopped, however, the artist appeared to go into labour and "give birth". She then rose from her wheelchair, leaving the gallery and her "crying baby" (actually a tape recorder wrapped in bandages) behind. This performance piece, Pregnant Bride in a Wheelchair, is typical of Bertlmann's work, in challenging the way she felt women are held back by societal conventions.

2. Her work, often overtly sexual, scandalised audiences in the Seventies and early Eighties

Born in Vienna in 1943, Bertlmann has worked in a variety of media: from drawing and video to installation. What unites her pieces is their frank, sexual nature, which – certainly early on – had the ability to shock. They often addressed male oppression and/or sexual violence. In Breast Incubator, viewers were invited to put their hands inside a Perspex container and fondle a pair of breasts – though these had knife-blades emerging from the nipples. With the sculpture Präservativwurfmesser, she conceived a catapult that took the form of two penis shafts.

3. Her work was routinely banned from exhibitions

The most infamous example came in 1979, when the Van Abbemuseum in Eindhoven and Centre Pompidou in Paris refused to include her work Pregnant Bride with Collection Bag in a touring group-show. Seen on the exhibition's first stop – at Düsseldorf’s Städtische Kunsthalle – the work was a performance piece in which Bertlmann (again dressed as a pregnant bride) asked visitors for money towards the upkeep of a holy relic on display: the erect penis of St. Erectus (actually a lewd sculpture made by Bertlmann). Her collection bag took the form of an outsized condom. Scores of outraged attendees called for the artist to be prosecuted.

4. Bertlmann was criticised by many feminists

5. She's more popular now than she was earlier in her career

As the years have passed, Bertlmann – now in her mid-seventies – has seen her reputation steadily rise. Her art featured prominently in 2015's The World Goes Pop exhibition at London's Tate Modern. In 2016, the first comprehensive monograph of her work was published, to coincide with a solo show at Vienna's Sammlung Verbund gallery. It seems Bertlmann is finally achieving recognition – alongside the likes of Cindy Sherman, Francesca Woodman and her compatriot Birgit Jürgenssen – as one of the leading feminist artists of the 20th Century. 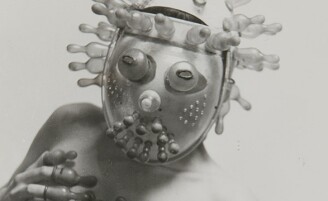