5 Things to Know About Maria Lassnig

Sotheby's S|2 Gallery in London will soon launch a new programme, beginning with two solo presentations of works by Austrian artists Maria Lassnig and Renate Bertlmann on the 27 April. With the continual growing interest in re-examining artists of the post-war period, artists like Lassnig and Bertlmann have become more prominent on the international stage – and beyond their home city of Vienna. Here, we introduce the key themes from Maria Lassnig's work.

1. She came of age under the Nazis

Lassnig was born in September 1919 in Kappel am Krappfeld, a small town in southern Austria. She initially trained to become a primary schoolteacher but, while painting portraits of the children, her ambitions changed. In 1941, she moved to Vienna to take up a place at the Academy of Fine Arts, which aligned itself at the time with the academic realist style favoured by the Nazis. Lassnig, however, refused to comply and reached back for inspiration to Austrian Expressionism, particularly the work of Egon Schiele and Oskar Kokoschka.

2. She waited half a century for international recognition

Lassnig painted for decades before anyone paid serious attention. Gallerists and dealers returned her portfolio with messages that the work was "strange", "morbid" and even "sick". Consisting mainly of unnerving self-portraits, her art put dealers and curators off. She only received her first retrospective in the UK aged 90, at the Serpentine Gallery in 2008. Reviewing that show, the Observer's art critic called Lassnig "the discovery of the century", adding "it would be hard to think of a greater artist of whom so little...is known".  In 2013 – a year before her death – Lassnig was awarded the Golden Lion lifetime achievement award at the Venice Biennale.

Lassnig was critical of artists who relied on photography for source material, thinking the act of painting should be organic, personal and first-hand. Not one for having a plan before she started, Lassnig called her practice "body-awareness painting" - which involved creating an image that reflected as closely as possible what she was feeling at that moment. "The only true reality is my feelings, played out within the confines of my body," she said. She often depicted that body distorted and deformed. Among her most startling works was 2005's You or Me, in which a naked 86-year-old Lassnig – full-frontal and saggy-breasted – glares out of the canvas, holding one pistol to her head and pointing another at the viewer.

4. Her belated fame has been connected to the rise of the selfie

Over a 70-year career, Lassnig captured herself on canvas in all manner of guises: from baby, robot and dumpling to lemon, monster and cheese-grater. The curator of a 2014 exhibition of her work in New York hailed "the perfect artist for the age of the selfie" – though this is a claim that's not entirely fair, given the tendency of that genre towards the superficial and Lassnig's art being anything but. Unlike millions of selfie-takers worldwide, Lassnig collapsed the distance between how one genuinely feels and how one presents oneself to the world.

5. She always rejected the label – but many have called Lassnig a feminist artist

Lassnig distanced herself from association with any political cause, but there are undoubtedly elements in her work that reflect feminist discourse. Her series of Kitchen War paintings from the 1970s, for example, critiqued women's relationship with domesticity, as did Self-portrait with Saucepan, 1995, in which the artist wears a cooking pot on her head. Lassnig never married or had children, declaring "a man, a child is not my destiny". 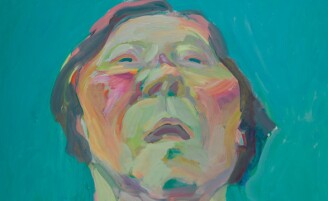