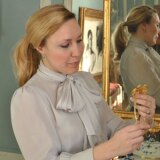 Mrs Ekeroth de Almeida has a BA in Art History and English Literature from Lund University in Sweden and has a Master's degree in Art Business from Sotheby’s Institute, London.