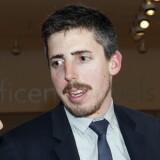 Scott Niichel joined Sotheby’s in 2006 and the Impressionist & Modern Art department in 2012, following six years as a specialist in Sotheby’s Russian Art department. He now leads a team in coordinating consignments and appraisals for new and established clients and plays a direct role in the development of many private collections.

During his time at Sotheby’s, Mr. Niichel has been directly responsible for the sale, at auction and privately, of over $250 million in art from many important collections and estates primarily across the United States and Canada, helping lead Sotheby’s to unprecedented market share in the category of Impressionist & Modern Art. Among many other projects, he organized the “white glove” (100% sold) auction Picasso Man & Beast: Works from the Collection of Marina Picasso, a sale which more than doubled its high estimate.

Mr. Niichel previously held positions at the State Hermitage Museum in St. Petersburg, The Metropolitan Museum of Art and the Solomon R. Guggenheim Museum in New York. He received degrees in Fine Arts and Russian Studies from Amherst College, where he focused on Western European Modern Art and its influence on Eastern
European Art and its diaspora. He is now an active member of Amherst’s Mead Art Museum Advisory Board.