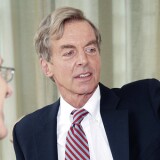 During his tenure, his department has been responsible for many of the most important Antiquity sales of all time, including the Nelson Bunker Hunt and William Herbert Hunt Collections which achieved $11.4 million (estimate: $5 – $7.5 million), the renowned collection of Christos G. Bastis, which achieved $9.2 million (high estimate: $7.3 million), the Charles Pankow Collection of Egyptian Art which realized $6.9 million, doubling its pre-sale high estimate of $3.5 million, and most recently the Collection of Clarence Day which realized over $36 million against an estimate of $5.7 to $8.6 million.

Among the most notable objects Mr Keresey and his department have sold are: the superb Cycladic Marble Head of a Goddess, now in the Getty Museum; the Roman Marble Portrait Busts of the Empress Sabina and her sister Matidia, on loan to The Metropolitan Museum of Art, the magnificent Bronze Group of Artemis and the Stag, also on loan to the Metropolitan, the renowned Elamite Marble Figure of a Lioness ("The Guennol Lioness"), a world record at the time for a sculpture of any period sold at auction, and the splendid Roman Imperial Marble Bust of Antinous, the last three objects, sold between 2007 and 2010, representing the top three prices paid for antiquities at auction.