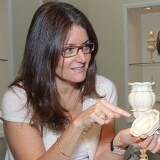 Ms Schwartz has been instrumental in the sales of the most important European Sculpture & Works of Art collections sold worldwide during the last two decades, including The British Rail Pension Fund, The Keir Collection of Medieval Works of Art in 1997, Property of the Albright-Knox Art Gallery in 2007 and The Collection Dormeuil in 2007, and the Arthur M. Sackler Collection of Bronzes and Terracottas in 2010.

Some of the world records for individual sculptures that she has handled directly include: the record-breaking sale of a Gothic wood figure of Saint Catherine by Tilman Riemenschneider that sold for $6.3 million in January 2008; the sale of an Austrian lead bust of a man by Franz Xaver Messerschmidt that sold for $4.8 million, a world record for an 18th century sculpture; and the sale of a Florentine polychrome terracotta group of the Madonna and Child, by Donatello, circa 1450 that achieved $5.6 million, a world-record for a Renaissance sculpture.

Recently, Ms Schwartz, in conjunction with scholars from the Straus Center for Conservation, Harvard University Art Museum and the Rijksmuseum in Amsterdam, edited a book of European Sculpture from the Abbott Guggenheim collection that combines art historical and technical studies of the bronzes and sculpture in this seminal American private collection.