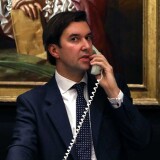 Edoardo Roberti joined the London Old Master Paintings department in early 2007 after obtaining a Master’s degree in French and Spanish Literature from Saint Catherine’s College, Oxford, and was appointed Head of Department in 2021. While Mr Roberti enjoys working on paintings from all schools, his main passion is Italian pictures. He travels extensively around Europe to source paintings and has forged strong relationships with many of the major collectors, scholars and dealers. Between 2015 and 2017 he was based in the New York offices.

Mr Roberti has been involved in numerous notable sales and rediscoveries including Correggio’s Madonna and Child, now in the National Gallery of Victoria, Australia, Willem Drost’s Flora, as well as Dosso Dossi’s Jupiter and Semele.