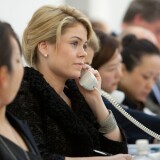 Ms. McAteer moved to New York in 2015 as head of the Chinese Works of Art department, and has spearheaded a number of highly successful theme and single-owner sales at Sotheby’s New York, including MING: The Intervention of Imperial Taste (2017) and MING: Luminous Dawn of Empire (2018). Prior to joining Sotheby’s in London in 2011, Angela McAteer worked for another auction house and has over ten years of experience in the industry. She specializes in Ming and Qing dynasty porcelain and works of art.