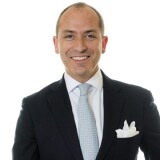 Andres White Correal joined Sotheby’s in 2000 as a Jewellery specialist in London. In his role he travels extensively, sourcing jewels from around the world and supporting our international sales in Geneva, New York and Hong Kong. From 2005 to 2015 he lived in Spain, where he acted as a consultant for Sotheby’s, securing many record-breaking jewels and private collections.

In 2015, Mr. White Correal was appointed Senior Director of Worldwide Business Development, spearheading the expansion of our extensive network and client base globally. He has been instrumental in initiating strategy resulting in the growth of Jewellery sales in the last two years.

Mr. White Correal earned a Graduate Gemmologist diploma from the Gemological Institute of America in New York in 1999. Prior to this, he obtained a joint degree in Economics and History from Columbia University in New York City, and a Masters in Fine and Decorative Arts from London’s Sotheby’s Institute of Art. Mr. White Correal has lectured on Jewellery and gemmology in Argentina, Brazil, Colombia, Spain, Germany and Austria.

In addition to his native Spanish, he is fluent in English, French, German, Italian and Portuguese. In his current position, Mr. White Correal currently works out of both our London and Madrid offices and attends all our global sales.