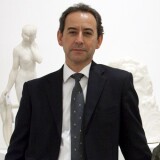 Alexander Kader, Senior Director & Head of the European Sculpture and Works of Art Department, Sotheby’s London, is a graduate of the Courtauld Institute of Art and City University. He joined Sotheby’s in 1996 from the Sculpture Collection at the Victoria & Albert Museum, having began his career at the renowned Heim Gallery.

Since his appointment as head of the department in 1999, Alex has contributed to many notable sculpture sales, achieving record prices for works by Gianlorenzo Bernini, Andrea Riccio, Antonio Susini, Henry Cheere and Giovanni Ambrogio Miseroni amongst many others.  Significant single owner sculpture sales during his tenure include the 2007 Dormeuil sale of medieval art, the 2009  Romano Antiquari sale in Florence and the 2011 Fabius Freres sale in Paris.

In 2010 Alex negotiated the private sale of the most expensive renaissance sculpture ever sold, the 16th century bronze relief of Ugolino by Pierino da Vinci acquired by the Liechtenstein collection for £10m.

Alex has also worked as part of the senior management team, initially as head of the Decorative Arts Division from 2002 to 2007, before being appointed head of the UK Regional Business from 2008 to 2010.

Alex has published on sculpture from the 17th to 20th century.