“Paris and London have long reigned as major European hubs for artistic creativity and innovation, just as they continue to be central to the art market. This year, as the art world community is not able to congregate in these cities physically, we are uniting the audiences by expanding the livestream model that we pioneered over the summer months in New York and London.”

“In the wake of a record year for Sotheby’s in France, we are excited to harness the global reach of a live-streamed auction and bring the innovative format across La Manche. Not bound by physical location, we were freed up to think across the region, and the pairing of these two sales made perfect sense as a cohesive and fresh offering to our clients.”

Next month, Sotheby’s is set to enhance and develop the livestream auction model pioneered by the company in this summer’s marquee sales in New York and London, by introducing the state-of-the-art format to Paris for the first time and bringing together two sales of Modern and Contemporary art from the global calendar.

This autumn, art lovers will once again have the opportunity to converge virtually for another live-streamed auction event: “Modernités / Contemporary” – two sales held in sequence that will together present defining moments of the 20th and 21st centuries through artworks by the greatest artists working in Europe and beyond.

The evening will open with Sotheby’s European Chairman Helena Newman taking to the rostrum in the London ‘control centre’ studio for the Paris auction “Modernités”, fielding bids in French and English live from colleagues in London, Paris, New York and Asia. This will then be followed, after a short break, with Sotheby’s annual autumn Contemporary Art Evening auction led by European Chairman Oliver Barker. Both segments of the auction will live-streamed, enhanced with dynamic and informative on-screen visuals for each of the works offered.

Among the highlights in the London Contemporary Art Evening Sale is a seminal black and white painting by Bridget Riley (est. £5.5-7.5 million / $7-9.6 million), showcasing one of the leading abstract painters at the height of her powers. A hypnotic work from the early 1960s, Riley takes simple, geometric forms to create an instant sensation of flux and movement of dizzying proportion. When last offered at auction at Sotheby’s in 2006, the painting established a record price for the artist that still stands. The work has since been exhibited as part of the artist’s landmark retrospective at the Hayward Gallery in London.

In Paris, Modernités – a sale that spans from 1900 and the birth of the avant-garde, modernist movement to the post-war period – explores the common threads between the artists who forged a distinct path over the century, among them Pierre Soulages, Francis Picabia and Wassily Kandinsky. Taking centre stage will be a connoisseurial private collection of twenty-five fresh-to-the-market works, comprising intimate gems from the Blaue Reiter in Germany to Surrealism in Paris, and an overall value in excess of €10 million / $12 million (separate release on ‘Un Regard Moderne’ available on request). Among the rediscoveries from the collection is a powerful wartime work on paper by Pablo Picasso, a rare male portrait from the 1940s when the artist was living in the seaside town of Royan with his lover Dora Maar. It is now set to make its auction debut.

The exhibitions for the two sales will be open to the public in our New Bond Street and Rue du Faubourg Saint-Honoré galleries respectively, with Modernités on view in Paris from 17-21 October and the Contemporary Art Evening Sale in London from 16-21 October. 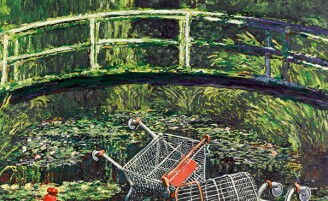