S otheby’s New York is pleased to present our first Watches auction of the year, an exciting curation of modern and vintage timepieces and clocks. Of note is an early F.P. Journe, Octa Calendrier, made circa 2004 for the Ruthenium Collection. The present model has a ruthenium-coated dial and ruthenium-coated brass movement. This was Journe’s first automatic annual calendar wristwatch and boasts an impressive 5-day power reserve. We are pleased to offer this piece dressed in a 40 mm platinum case and a gently aged ruthenium dial with the original box, a certificate from F.P. Journe confirming the timepiece, and accessories.

Also of note is a rare Omega Speedmaster that checks all the boxes for collectability. This Speedmaster features an extremely rare red racing dial that is double signed by the famed retailer, Meister. The piece is offered by the original owner, Mr Henk de Vries, a European race car driver and anti-skid driving instructor whose illustrious pupils have included Prince Bernhard of the Netherlands, and Prince Philip of the UK, not to mention most of the world’s Grand Prix drivers at the time.

This sale also celebrates a fine selection of well-preserved vintage chronographs by Rolex, Universal Geneve and more. Complicated modern marvels are also available by Patek Philippe, F.P. Journe, Audemars Piguet, and A Lange & Sohne. Rounding out our sale is a number of limited edition pieces by brands like IWC and Omega. Wristwatches by Piaget, Cartier, Bulgari and Longines offers an elegant selection for ladies. 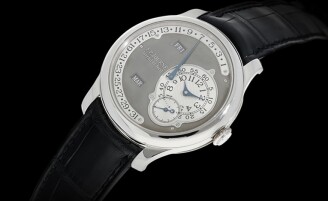 F rancois-Paul Journe began his career as a clock restorer in France. Ultimately, the talented watchmaker created his own manufacture in 1999. His innovative approach to watchmaking and great sense of design inevitably made Francois-Paul Journe one of the most acclaimed independent watchmakers and the only one to win the celebrated Aiguille d’Or prize three times.

The Ruthenium Collection was made starting in 2001 until the series was completed in 2004. It was the first limited edition collection F.P. Journe produced, and comprised of five different models. Each model was numbered in 99 pieces, and was intended provide something new and exclusive for his collectors. The watches have ruthenium-coated gold dials and ruthenium-coated brass movements, hence the name. Encased in platinum, this was also the first time Journe used a 40 mm case, which is larger than the usual 38 mm size of the time. In fact, with the exception of the Octa Zodiaque, these are the only 40 mm brass movement watches around, which makes them all the more unusual.

The present timepiece is an Octa Calendrier from the Collection. F.P. Journe carefully considered all aspects of the watch including its legibility. The contemporary asymmetrical dial ensures that all calendar functions of the watch are placed toward the left whilst the time stays on the right side of the dial. The Octa Calendrier was Journe’s first automatic annual calendar wristwatch and boasts an impressive 5-day power reserve. In reality, the Octa Calendrier under promised and over delivered by exceeding its stated power reserve, with a true power reserve potential of 7-days. Besides the dial and movement color differentiating this piece from a regular series Octa Calendrier, the day and month windows have dark backgrounds with white text instead of white backgrounds with black text.

The present watch represents a rare opportunity to own an early limited edition F. P. Journe in very attractive condition, accompanied by a presentation box and Certificate of Origin from Journe confirming the timepiece. 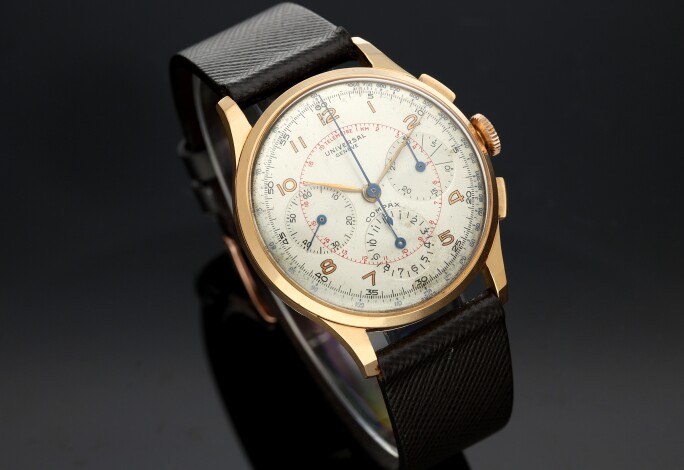 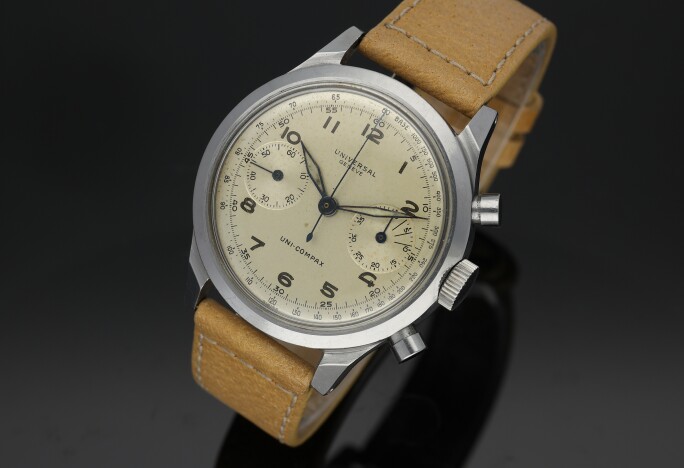 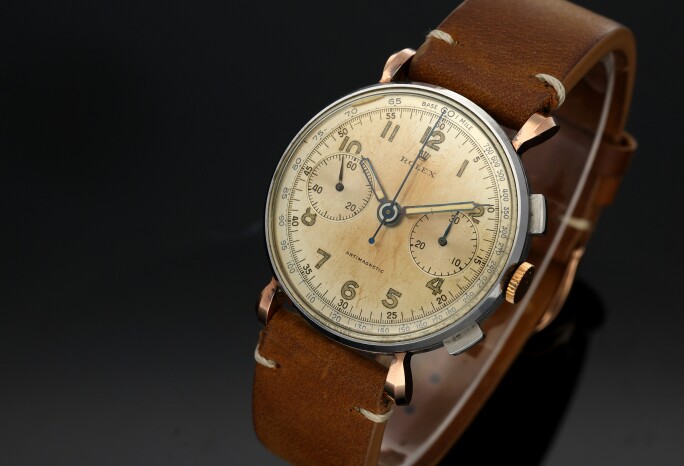 O mega’s Speedmaster is legendary amongst collectors. Launched in 1957, it has been in continuous production and offered in innumerable configurations whilst retaining its unique visual DNA and hard-earned reputation for precision timekeeping. This combination of features led the Speedmaster to become the watch of choice for NASA and their early astronauts who wore them on both the Apollo 11 and 14 space missions. Whilst produced in the hundreds of thousands since its inception, there are some Speedmasters that are elevated above all others based on their rarity and desirability.

Amongst these are those variants wearing black exotic ‘Racing’ dials, produced in 1967-8 with the reference 145.012-67 SP, such as the present lot, offered by the original owner, Mr Henk de Vries. This marks a rare and unique opportunity to acquire this pre-professional model, double signed by the famed Zurich retailer.

There were two generations of the Racing Dial Speedmaster with three executions in total. All were characterized by their black dials, bi-color indexes and specific hand configurations. The first generation came in two executions, firstly a two line ‘Pre-Professional’ dial with applied metal Omega logo and SWISS MADE dial designation. This was subsequently followed by the second execution ‘Professional’ variant, with the word ‘Professional’ added below the Speedmaster text, painted Omega logo and T SWISS MADE T dial designation. Both versions shared the same hand combination of red hands for hours, minutes and seconds and white hands for the chronograph indications. Powering the first generation is the legendary caliber 321 manual wound movement, one of the most revered calibers of all time.

Of these first executions, only 12 examples are known to the market with only 6 of these being Pre Professional examples. What separates the current watch from these others is the presence of its retailer’s stamp to the dial. Founded in 1881, Meister is a large Zurich based retailer who infrequently stamped their name to the dial of the watches they sold in the 1960’s. In the past Meister stamped Heuer Carreras and Autavia’s have been known, and a handful of Speedmasters too, but this is the only known example of a double stamped Racing dial, with the recognizable ‘Meister’ text located below ‘Speedmaster’ on the dial. In addition, this example is presented in excellent condition with sharp case angles and its original 1039/516 bracelet.

This unique timepiece is offered by Henk de Vries, an equally unique and charismatic Dutch Canadian adventurer. In college he studied Auto Techniques and following his service in the Transport Division of the Dutch Army he took up rallying and car racing. He then became the Director of the Anti-Slip School near the Zaandvoort Grand Prix Race Track in Holland where he taught the art of Skid Control to many famous race car drivers, including Jim Clarke and Graham Hill. He emigrated from Holland in 1966 and partnered with BP Oil to open the first of two Skid Schools in Canada. While operating these schools he raced Porsches and Mini Coopers on weekends at the Mosport racetrack near Toronto. Mr de Vries purchased the present lot in 1969 directly from the Meister Boutique and continued to wear the watch for the next 40 years, from racing cars to racing yachts. Wearing his trusty Speedmaster, Henk crossed the Andes into Chile, twice sailed across the Atlantic Ocean, braved storms in the Bay of Biscay, sailed through the Bermuda Triangle, around the Caribbean Islands and up and down the US Atlantic seaboard countless times.

This Omega Racing Speedmaster ticks all the boxes for the most discriminating of Omega collector, coming from the original owner and in excellent condition, along with an extremely rare retailer stamped early dial variant, making it a possibly unique and historically important Speedmaster.

P roduced in 1931, this triple hinged case was produced by Verger Freres – a Parisian jeweler and case manufacturer – for Vacheron Constantin. With three hinged portions that fold in, this watch was most likely designed to be fitted on a fixed length bracelet. Instead of unfastening a bracelet clasp to remove the watch, the watch case could be unfolded for easier removal, then clicking back into itself once secured on the wrist.

To the best of our knowledge, the present watch is the only known reference in existence, highlighting the absolute rarity of the present timepiece. 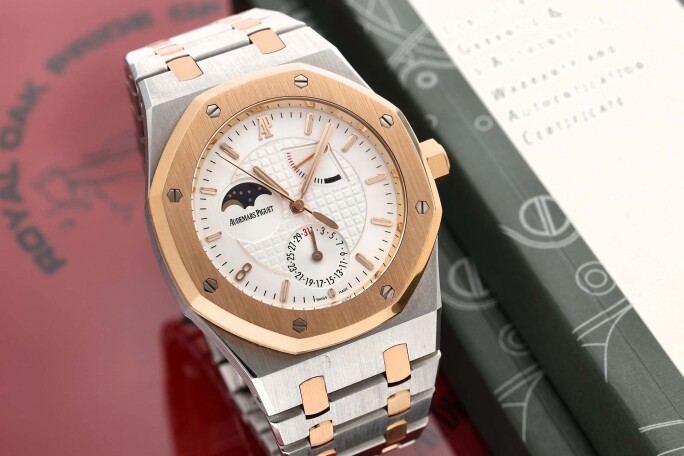 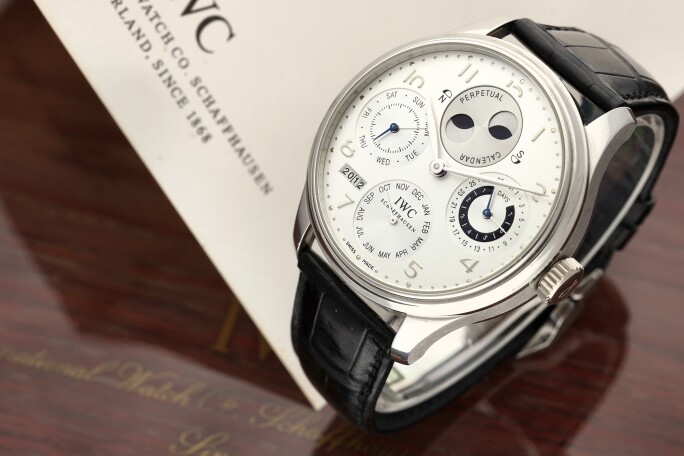 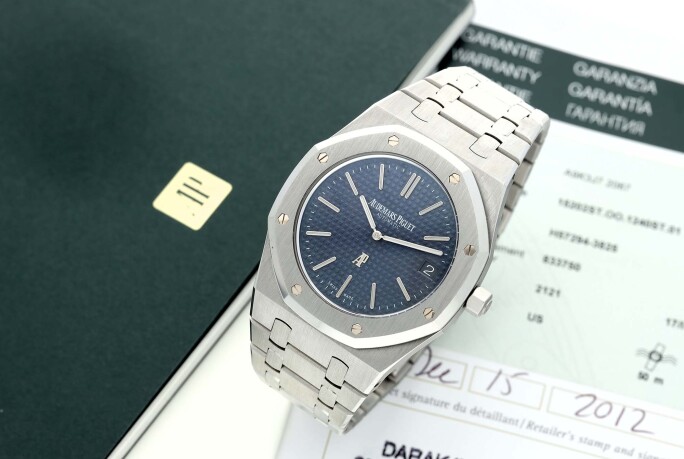 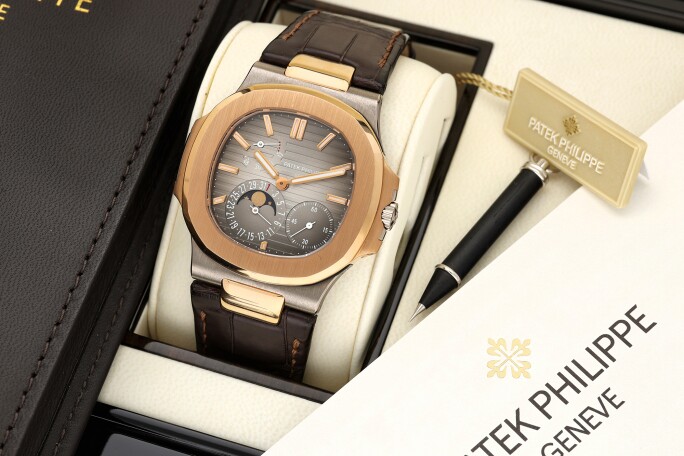 A braham Louis Breguet revolutionized the horological world when he invented the tourbillon in order to create more accurate timepieces. Conceived in 1795, and patented in 1801, the tourbillon counter acts the effects of gravity by mounting the balance wheel in a rotating cage in order to negate the effect of gravity on the escapement. Makers now include the tourbillon as a novelty and demonstration of sophisticated watchmaking skill.

The Breguet firm continues to honor Abraham Louis Breguet's legacy today by creating exceptional high-end timepieces. The present lot combines the tourbillon with other sought after complications, such as the perpetual calendar, retrograde date, and leap year indication. The guilloché dial, which features registers finished with silver chapter rings, epitomizes Breguet's classic aesthetic. This piece perfectly encapsulates the archetypal watchmaker's refined level of craftsmanship, and would make a wonderful addition to any connoisseur's collection.