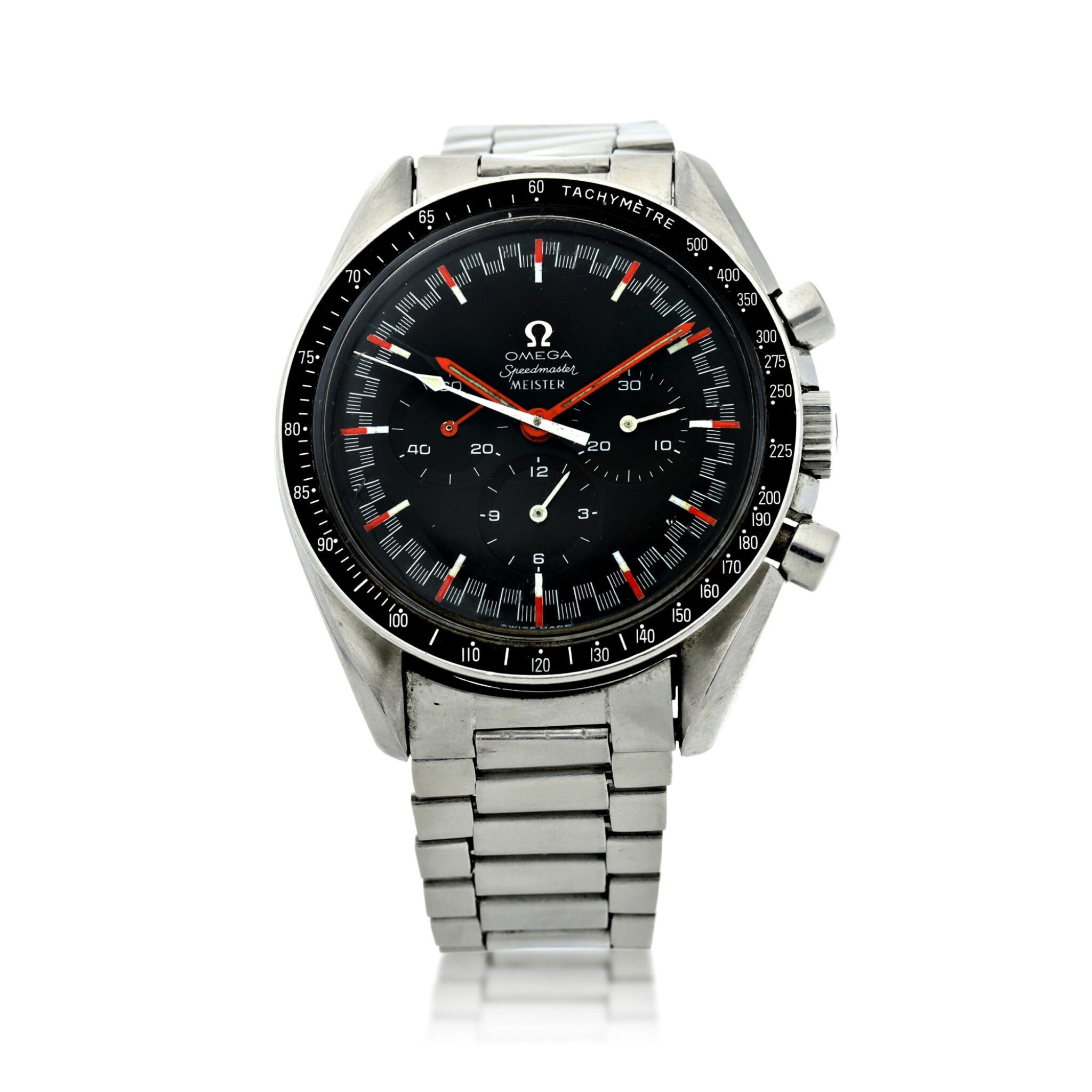 RETAILED BY MEISTER: A STAINLESS STEEL CHRONOGRAPH WRISTWATCH WITH BRACELET, CIRCA 1967

Case: The case is in overall good condition with wear commensurate with age. The lyra lugs retain strong proportions. The Seahorse on the case back is visible and clear. Original crystal with some surface scratches. Bracelet with signs of wear and stretch. Endlinks stamped 516, clasp is stamped 1039. Service bezel insert.

Dial: The dial is in overall good original condition with some signs of age. Deterioration to the luminous material on the majority of hour markers.

Movement: Chronograph function operating. The movement is running at time of cataloging, however it was not tested for the accuracy of time or duration of the power reserve and may need service at the buyer's discretion. Please note that Sotheby's does not guarantee the future working of the movement.

Omega’s Speedmaster is legendary amongst collectors. Launched in 1957, it has been in continuous production and offered in innumerable configurations whilst retaining its unique visual DNA and hard-earned reputation for precision timekeeping. This combination of features led the Speedmaster to become the watch of choice for NASA and their early astronauts who wore them on both the Apollo 11 and 14 space missions. Whilst produced in the hundreds of thousands since its inception, there are some Speedmasters that are elevated above all others based on their rarity and desirability.

Amongst these are those variants wearing black exotic ‘Racing’ dials, produced in 1967-8 with the reference 145.012-67 SP, such as the present lot, offered by the original owner, Mr Henk de Vries. We are pleased to present this rare and unique opportunity to acquire this pre-professional model, double signed by the famed Zurich retailer.

There were two generations of the Racing Dial Speedmaster with 3 executions in total. All were characterized by their black dials, bi-color indexes and specific hand configurations. The first generation came in two executions, firstly a two line ‘Pre-Professional’ dial with applied metal Omega logo and SWISS MADE dial designation, which was subsequently followed by the second execution ‘Professional’ variant, with the word ‘Professional’ added below the Speedmaster text, painted Omega logo and T SWISS MADE T dial designation. Both versions shared the same hand combination of red hands for hours, minutes and seconds and white hands for the chronograph indications. Powering the first generation is the legendary caliber 321 manual wound movement, one of the most revered calibers of all time.

Of these first executions, only 12 examples are known to the market with only 6 of these being Pre Professional examples. What separates the current watch from these others is the presence of its retailer’s stamp to the dial. Founded in 1881, Meister is a large Zurich based retailer who infrequently stamped their name to the dial of the watches they sold in the 1960’s. In the past Meister stamped Heuer Carreras and Autavia’s have been known, and a handful of Speedmasters too, but this is the only known example of a double stamped Racing dial, with the recognizable ‘Meister’ text located below ‘Speedmaster’ on the dial. In addition, this example is presented in excellent condition with sharp case angles and its original 1039/516 bracelet.

This unique timepiece is offered by Henk de Vries, an equally unique and charismatic Dutch Canadian adventurer. In college he studied Auto Techniques and following his service in the Transport Division of the Dutch Army he took up rallying and car racing. He then became the Director of the Anti-Slip School near the Zaandvoort Grand Prix Race Track in Holland where he taught the art of Skid Control to many famous race car drivers, including Jim Clarke and Graham Hill. He emigrated from Holland in 1966 and partnered with BP Oil to open the first of two Skid Schools in Canada. While operating these schools he raced Porsches and Mini Coopers on weekends at the Mosport racetrack near Toronto. Mr de Vries purchased the present lot in 1969 directly from the Meister Boutique and continued to wear the watch for the next 40 years, from racing cars to racing yachts. Wearing his trusty Speedmaster, Henk crossed the Andes into Chile, twice sailed across the Atlantic Ocean, braved storms in the Bay of Biscay, sailed through the Bermuda Triangle, around the Caribbean Islands and up and down the US Atlantic seaboard countless times.

This Omega Racing Speedmaster ticks al the boxes for the most discriminating of Omega collector, coming from the original owner and in excellent condition, along with an extremely rare retailer stamped early dial variant, making it a possibly unique and historically important Speedmaster.