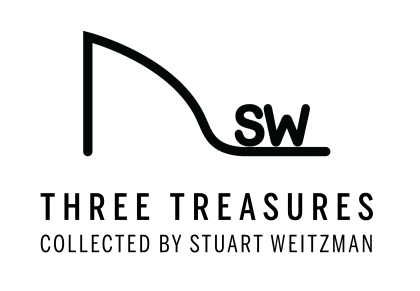 S otheby’s New York is pleased to present Three Treasures – Collected by Stuart Weitzman, a dedicated live auction of three legendary treasures from the personal collection of the renowned fashion designer and collector. On 8 June 2021 Sotheby’s will offer the fabled and elusive 1933 Double Eagle Coin, which set a world record when it last sold at auction in 2002, and the only example that is legally sanctioned by the United States government for private ownership; the sole-surviving example of the British Guiana One-Cent Magenta, the most famous and valuable stamp in the world; and The Inverted Jenny Plate Block, the most well-known and sought-after American stamp rarity. Iconic as they are rare, the Double Eagle and the British Guiana will be offered with estimates of $10/15 million each and are poised to set new world auction records in their respective categories, and the Inverted Jenny will carry an estimate of $5/7 million, set to eclipse its own record for an American philatelic item. 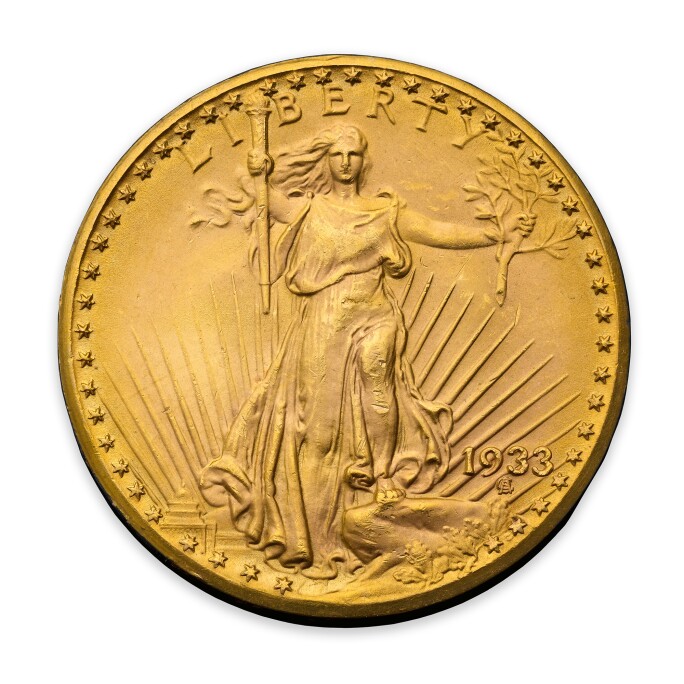 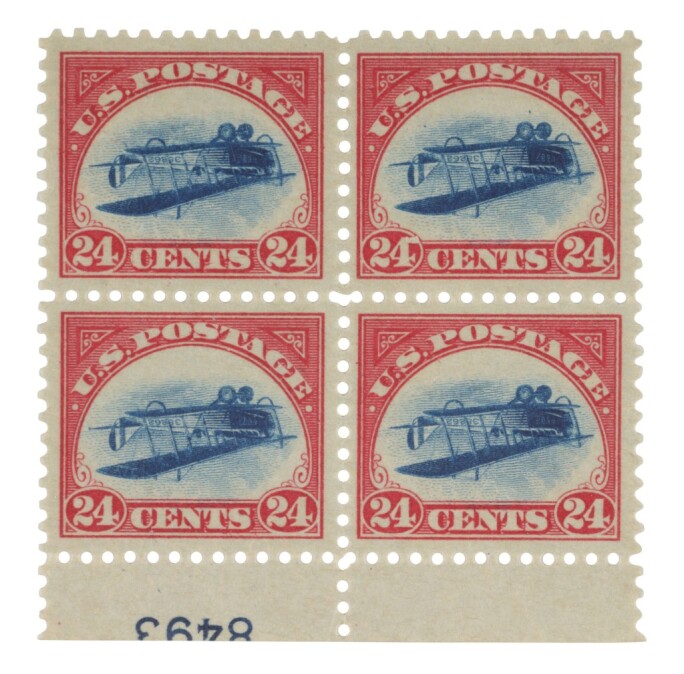 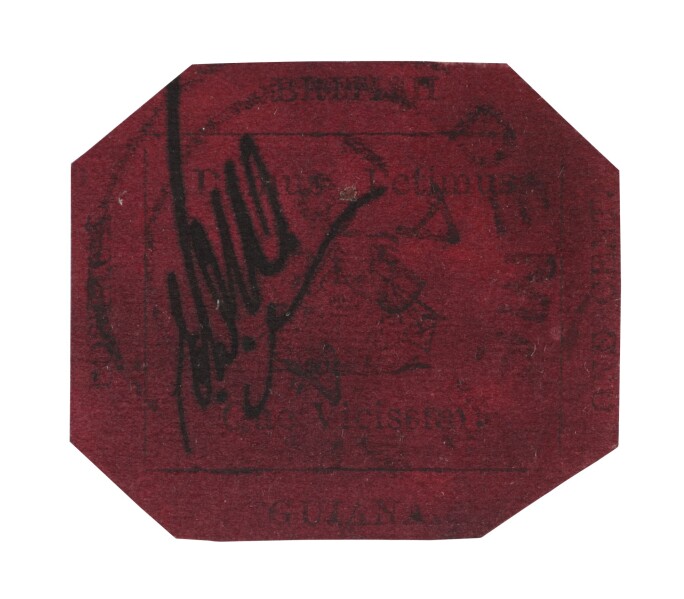 The three treasures will be on public view by appointment in Sotheby’s York Avenue Galleries during New York Asia Week from 11 – 17 March as well as this May alongside the Contemporary and Impressionist Art exhibitions for our marquee spring auctions, and 4 – 7 June in the lead up to the auction on Tuesday, 8 June.

Stamp and Coin Collectors: One plus One equals One
View Slideshow

One of the most coveted coins in the world, the 1933 Double Eagle (a twenty dollar gold coin) is unique in that it is the only example that may be legally owned by an individual. Stuart Weitzman purchased the coin at a Sotheby’s/Stack’s auction in 2002 for a world record price, nearly doubling the previous record. That auction was conducted on behalf of the United States Government, following a landmark legal settlement which authorized the private ownership of this 1933 Double Eagle alone. At the conclusion of the sale, in an historic moment, the Director of the United States Mint signed a Certificate of Monetization that, in return for twenty dollars, authorized the issuance of this single example.

The 1933 Double Eagle has a richly captivating history which encapsulates large swathes of United States history and has been at the center of intrigue for more than 80 years. It is America’s last gold coin struck for circulation, ending a tradition begun in 1795. Designed by renowned sculptor Augustus Saint-Gaudens at the behest of President Theodore Roosevelt, its imagery of Liberty striding forward on the obverse, with the American eagle in flight on the reverse is lauded as America’s most beautiful coin design. In 1933, President Franklin Roosevelt, as part of his effort to lift America’s tattered economy out of the Great Depression took the country off the gold standard. Struck but never issued for use, all 1933 Double Eagles were ordered destroyed with the exception of two examples sent to the Smithsonian Institution. In 1937, in the same month the 1933 Double Eagles were melted, several examples appeared on the market, which ultimately led to a Secret Service investigation in 1944 that determined all 1933 Double Eagles in collectors’ hands had been stolen from the United States Mint, and therefore illegal to own.

However, only weeks before the Secret Service investigation began in 1944, one of the 1933 Double Eagles was purchased and erroneously granted an export license. It entered the famed coin collection of King Farouk where it remained diplomatically untouchable until 1954 when his collection was offered at auction by Sotheby’s, acting on behalf of the new Republic of Egypt. Upon learning of its presence in the sale, the United States government successfully requested that the coin be withdrawn. But it was not returned and the coin’s whereabouts remained a mystery until 1996 when it was seized by the Secret Service in a sting operation at the Waldorf Astoria in New York. Following a five-year legal battle, which unearthed the improvidently issued export license, the case was settled and the government permitted this single 1933 Double Eagle to be privately owned.

In 2005, ten more 1933 Double Eagles surfaced in the possession of the family of one of the prime suspects in the 1944 Secret Service investigation and another legal battle ensued. More than a decade later, after a jury trial and appeals (to as high as the Supreme Court) the 1933 Double Eagles were ruled the property of United States (another example was voluntarily surrendered following the litigation), and confirmed the government’s statement in 2002 that Stuart Weitzman’s 1933 Double Eagle is “the only example the United States Government has ever authorized, or ever intends to authorize, for private ownership.”

No stamp is rarer than the sole-surviving example of the British Guiana One-Cent Magenta, a unique yet unassuming penny issue from 1856, which has been heralded as the pinnacle of stamp collecting for more than a century. Each of the four times it has sold at auction, it has established a new record price for a single stamp, last selling to Weitzman in 2014 at Sotheby’s for $9.48 million, nearly one billion times its original face value.

The British Guiana is equally notable for its legacy, having been rediscovered by a 12-year-old schoolboy living in South America in 1873, and from there passing through some of the most important stamp collections ever assembled. Its storied history starts in 1852, when British Guiana began receiving regular postage stamps manufactured in England by Waterlow & Sons; due to a clerical error in 1855, a shortage of the imported stamps threatened to disrupt the postal service throughout British Guiana and forced the postmaster to turn to the printers of the local Royal Gazette newspaper to commission a contingency supply of postage stamps for the following year: the one-cent black on magenta colored paper, a four-cent magenta, and a four-cent blue.

The sole-surviving example of the one-cent magenta was first rediscovered in 1873 when L. Vernon Vaughan, a 12-year-old schoolboy living with his family in British Guiana, found the stamp among a group of family papers bearing many British Guiana issues. A budding philatelist, Vaughan could not have known that the one-cent was unique, but he did know that he did not have an example and added it to his album. He would later sell the stamp for several shillings to another local collector. The British Guiana then entered the UK in 1878, and shortly after, it was purchased in Paris by Count Philippe la Renotière von Ferrary, perhaps the greatest stamp collector in history. Following the war, France seized his collection, which had been donated to the Postmuseum in Berlin, as part of war reparations due from Germany, and sold the stamp in 1922 in one of a series of celebrated auctions from 1921–25. It was bought by Arthur Hind, a textile magnate from New York, for its first auction-record price of $35,000, followed by: Australian engineer Frederick T. Small; then a consortium headed by Irwin Weinberg; then by John du Pont, heir to the eponymous chemical company fortune, eccentric amateur sportsman, and avid collector. Du Pont paid $935,000 for the stamp in a 1980 auction, before it was last sold at auction to Weitzman, marking the object’s most recent record-setting price of $9.48 million. Carrying on the tradition of previous owners of the British Guiana, Weitzman added his own personal mark to the reverse of the stamp this past October, inscribing his initials “SW” along with a line drawing of a stiletto shoe as a nod to his legacy in fashion.

The first United States airmail issue and the most highly recognized and sought-after philatelic error, the 1918 24-Cent Inverted Jenny Plate Block is the most famous and valuable item in United States stamp collecting. There was only one sheet of 100 Inverted Jennies ever sold, and only one plate block comprising positions 87-88 and 97-98. It last appeared on the market 16 years ago when it sold at auction for $2.97 million and was subsequently purchased privately by Weitzman in 2014.

To pay the designated 24 cent rate for the new official airmail route, the United States Postal Service released a special bi-colored stamp in May 1918 featuring a blue Curtiss JN-4 “Jenny” biplane – the country’s first airmail carrier – surrounded by a carmine red frame. A single sheet of 100 stamps with the biplanes appearing upside-down – due to a printing error – was sold for $24, the face value of the 100 stamps, to William T. Robey. A cashier at a stock brokerage firm and an astute stamp collector, Robey recognized the rarity of the flawed sheet and rebuffed the USPS demands that he return the stamps after they learned of their mistake. Instead he sold the sheet just a few days later marking the beginning of the wild and sinuous journey of the 100 Inverted Jennies, which encompasses some of the greatest stories in American stamp history.

Having rapidly gained notoriety within the philatelic community, Eugene Klein – the Philadelphia stamp dealer who purchased the sheet from Robey – immediately sold it to the multi-millionaire Colonel “Ned” Green, a wildly eccentric stamp and coin collector. Klein later persuaded Green to allow him to sell individual stamps to eager collectors, requiring him to carefully break the sheet into singles and blocks which he did after discreetly, and astutely, numbering every stamp in light pencil on the reverse. The Colonel retained numerous singles and all the major blocks – including the present plate number block, which then comprised eight examples. Following Green’s death in 1944, the block of eight Jennies passed into the collection of Amos Eno where it was separated into a block of four and ten years later it was purchased by the Weill Brothers of New Orleans, beginning an association that was to last for thirty-five years. Described as “The most important item in United States philately” when the Weill Brothers stock came to auction in 1989, it was bought for the unprecedented sum of $1.1 million by an anonymous buyer who kept the block until 2005 when famed bond investor William Gross purchased it for $2.97 million.