G eneva’s Magnificent Jewels and Noble Jewels: Part II evening auction on 23 June, features an extraordinary selection of rare and important coloured diamonds and iconic pieces from history’s most important jewellery maisons. This highly curated sale features extraordinary jewels for the most discerning collectors dating from the 19th century to the present day.

Diamonds In Every Colour

D iamonds occur in an array of colours – from pure whites and soft pinks and blues to brilliant hues of purple and red. No matter the colour, each diamond possesses a unique composition of chemical elements that have the power to dictate rarity, value and desirability.

White diamonds fall into the largest colour spectrum on the Diamond Grading Scale, which begins with “D” colour, totally colourless, and ending with “Z” colour, which is pale yellow or brown. The variable in this spectrum is the element Nitrogen – a D colour diamond has no nitrogen (or only a microscopic amount) nor any other element present. The larger the amount of nitrogen present the more the colour increases, thus moving the diamond along the colour spectrum. Diamonds that fall within the D-F colour range are rare and therefore more will command a higher price than those towards the end of the spectrum.

With yellow diamonds, nitrogen is incorporated into their carbon crystal structure. These nitrogen impurities give a diamond its yellow colour as they modify light and absorb the blue part of the visible spectrum. All fancy coloured diamonds follow the same colour grading scale: Fancy Light, Fancy, Fancy Intense, and Fancy Vivid. As the colour concentration increases within the stone, so does its value.

Blue diamonds are caused by Boron, a rare element in the Earth’s crust. Many are modified with a grey secondary tone, or an uneven saturation with areas of colourless windowing, making natural blue diamonds with exceptional saturation and brilliance extremely rare.

What makes a pink or red diamond? As yet, we have no definitive answer. Whilst it is known that there is no impurity causing the colour, it is believed but not yet proved that it is due to a mutation in the crystal lattice that alters the stone’s molecular structure.

G ifted in 1876 to Consuelo Yznaga upon her marriage to George Montagu, Viscount Mandeville, this necklace was likely the star of a similarly-designed parure. Featuring an impressive row of emeralds spaced by delicate scrollwork motifs, this design exemplifies the Victorian fashions favoured by the group of women now known as ‘The Million Dollar American Princesses,’ a group pioneered by the Duchess of Manchester herself. As the corset helped make the décolleté the focal point of women’s fashion, layers upon layers of jewels were called to conceal yet draw attention. Necklaces such as the present lot would have likely been partnered with additional rivièrès and gem-set floral creations to accessorise the bustled gowns worn to the innumerable events dotting the social season.

Born in Louisiana in 1853 to a plantation owner of Cuban descent, Consuelo Montagu, née Consuelo Yznaga, was known for what The Pittsburgh Press referred to as ‘the Spanish type of beauty,’ with jet-black eyebrows and abundant golden blonde hair.

Her marriage to a member of the British aristocracy was an unfamiliar union that required sufficient time for both families to endorse. The 1876 wedding at Grace Church in New York City was described as ‘one of the most brilliant affairs of the season’ by The New York Times. Crowds crammed into the chapel to get a glimpse of the bride, who wore an ornate satin design with New York Times dually noted that the presents received by the bride were very elaborate and costly.’ Wall Street tycoon Mr. Leonard Jerome gifted the young bride with heavy gold bracelets’ while Mrs. William Vanderbilt presented a ‘point lace fan’. It is important to note these two wedding guests in particular when observing the influence of Consuelo’s marriage; Mr. Jerome’s daughter, Jennie, a friend of Consuelo, later went on to become Lady Randolph Churchill via marriage (and was mother to Sir Winston Churchill); Alva, known as Mrs. William Vanderbilt, named her own daughter Consuelo in the hopes she would receive the same marital rank as her longtime friend (and indeed she did become the Duchess of Marlborough). As a social pioneer, Consuelo became a sort of matchmaker, inspiring her friends from America to find suitable husbands; husbands that needed American fortunes to maintain their decaying estates in exchange for noble titles unavailable to American girls of even the highest social rank. Demure yet powerful in design, this necklace exemplifies the quiet confidence that defines the ‘Dollar Princesses’.

The necklace was displayed at the Victoria & Albert Museum in London for 22 years.

"The most interesting of the five was Consuelo Yznaga, who, in a sense, beat the nobles at their own game. When she saw the lay of the land, and one might add, the lays of her husband, she simply kicked over the traces and adopted the men's morals for her own. She became the doyen of London society, had a procession of lovers and was apparently adored for her charm and wit."

'The Gilded Cage' by Marian Fowler 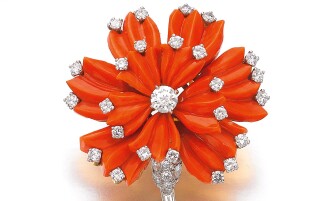 Jewelry
Coral and the Cartier Style

Known for emblematic designs, avant-garde materials and glamorous commissions, the 1920s and 1930s continue their prominence in the world of auctions. These jewels are both unique to the Art Deco design aesthetic and unique to the time period in which it was created. As a result, each surviving creation is a piece of art history, design history and social history, wrapped in diamonds, gemstones and precious metals.

Exceptional contemporary jewels demonstrate the continuing mastery and creativity of modern-day diamond cutters and master jewellers. From Hemmerle and Verdura to Cartier, these houses are both widely recognised as some of the most talented jewellers of the modern day.