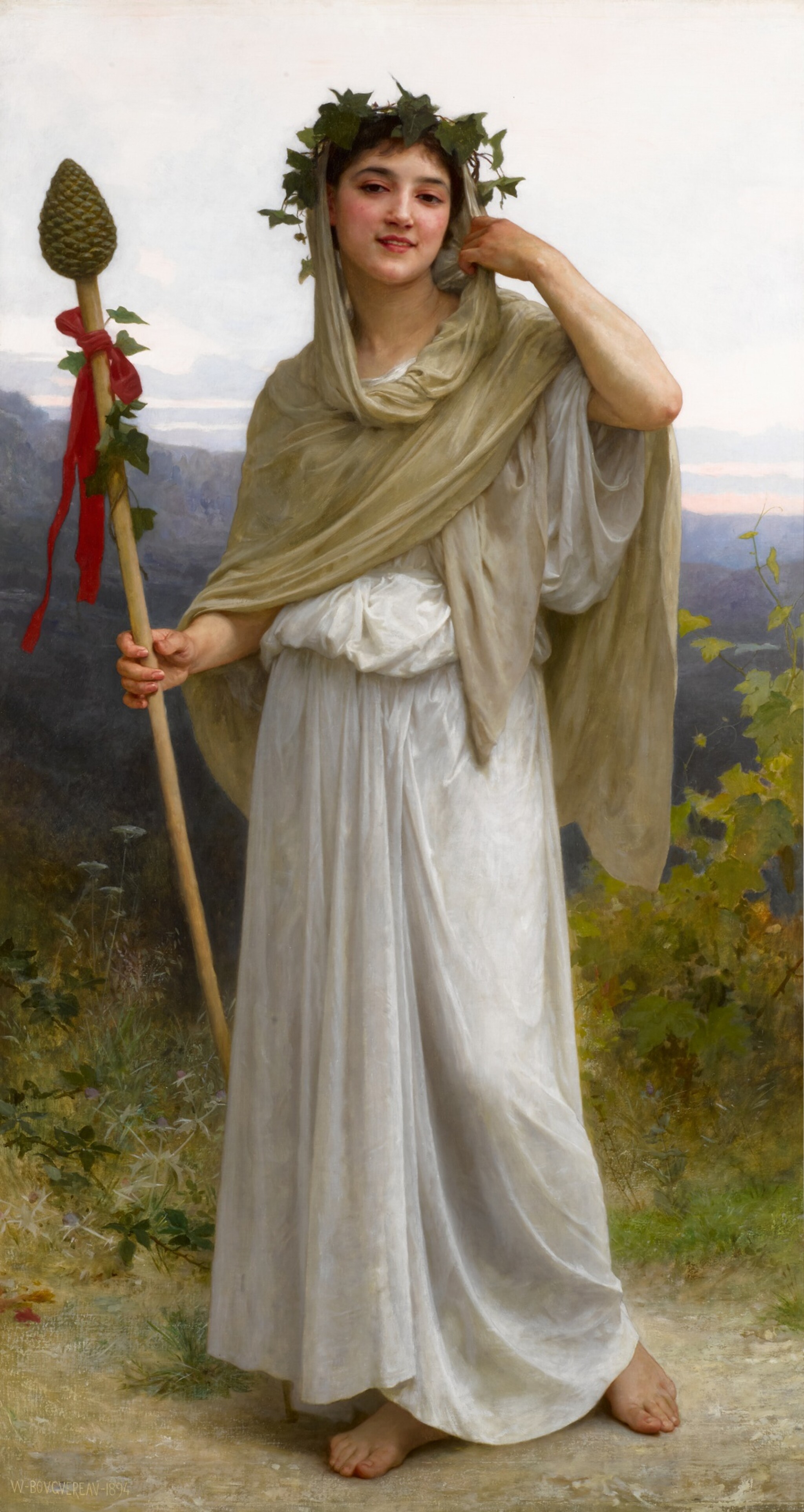 For further information on the condition of this lot please contact audrey.brennan@sothebys.com

E. H. Carlton (acquired at the above sale)

Private collection (acquired at the above sale and until 2008)

Marius Vachon, W. Bouguereau, Paris, 1900, p. 158
Mark Steven Walker, "William-Adolphe Bouguereau, A Summary Catalogue of the Paintings," William-Adolphe Bouguereau, L'Art Pompier, exh. cat., Borghi & Co., New York, 1991, p. 74
Damien Bartoli with Frederick C. Ross, William Bouguereau, Catalogue Raisonné of his Painted Work, New York, 2010, p. 294, no. 1894/14 (with incorrect provenance), illustrated
Painted in 1894, Prêtresse de Bacchus is a tremendous example of Bouguereau’s virtuosic skill that had brought him such enormous commercial success by this point while anticipating his later compositions. In contrast to his earlier works that illustrate Classical themes, such as La jeunesse de Bacchus (1884, French Private Collection, Paris) or Nymphes et Satyre  (1873, Clark Institute, Williamstown) – paintings that intended to convey a particular narrative – Prêtresse de Bacchus features a single model and belongs to a series the artist referred to as “fantasy paintings.” In the present work, Bouguereau isolates his subject within a vast landscape and, without any contextual framework beyond her costume, she becomes representative of a lost, ancient ideal.

The Priestess of Bacchus herself belongs to the iconographic tradition of Maenads, or Bacchantes; mythological women who were popular subjects with nineteenth century artists who favored them for their intrinsic eroticism and ecstatic youthfulness. Although her calm demeanor differs greatly from the usual ferocity of the lascivious Bacchantes, she is clearly identified as a Dionysian devotee by two unmistakable symbols: the ivy wreath she wears on her head, a reminder of her connection to wine and revelry; and the thyrsus she holds in her right hand, a pinecone topped staff originating in Attic vase painting as a symbol of Bacchus and present in several of Bouguereau’s other depictions of Bacchantes.

Bouguereau both acknowledges and modifies his Classical source, presenting this priestess simply as an enduring object of aesthetic contemplation.  The model for this work, an Italian girl who frequently posed for Bouguereau between 1894 and 1895, posed for several such “fantasies” including a companion painting to the present lot of a seated Bacchante (1894, Private Collection), as well as Souvenir  (1894, whereabouts unknown), and Le secret (1894, Private Collection, United States).  In his choice of a model with recognizably Italian features, as well as in the work’s mise-en-scene against a cool-colored landscape, Bouguereau draws a comparison between these fantasies of an ideal antiquity and the contemporary Italian peasant women that form so much of his painted oeuvre, implying an unbroken continuum of idealized women from antiquity to his own time.
In depicting this young woman devoid of all other narrative context, Bouguereau guides the viewer’s focus to the figure’s delicate features and remarkable physiognomy; from her elongated neck, suggesting the influence of Bouguereau’s beloved Florentine Renaissance, and to her strong, contrapposto stance that evokes the autonomous beauty of Classical statuary.

This painting is especially noteworthy for its exemplary flesh-tones. Well-painted skin was considered both the greatest challenge and the most important painterly quality in much of nineteenth century Academic discourse. By depicting the priestess with her arm raised, he demonstrates the subtle play of color running down her arm, with hues of blue and purple paint overlaid by translucent layers of warmer tones. Indeed, the same principle of translucency that gives warmth to her skin informs the diaphanous handling of her drapery, which hints at the body beneath.